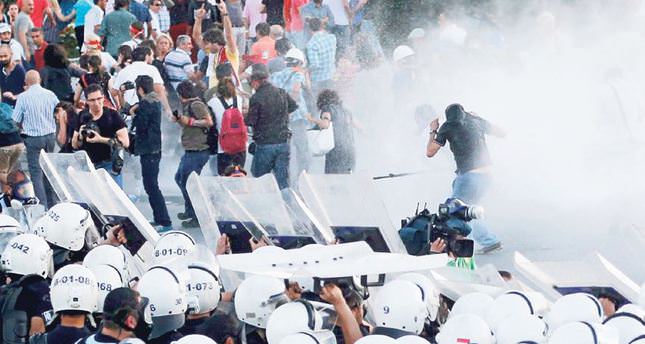 by Daily Sabah Jun 17, 2014 12:00 am
Turkish police intervened in 3 percent of all demonstrations across the country in 2013, and 2.5 percent until May 19 this year, according to figures released as part of a study conducted by the Interior Ministry.

Turkey's Interior Ministry released new statistics about last year's Gezi Park protests and other demonstrations held across the country in 2013 and 2014. According to statistics, Turkish National Police only intervened in 1,070 protests, rallies and other events out of 38,079 in 2013, about 3 percent of overall events.

A statement by the Interior Ministry accompanying the statistics said Turkish police were wrongfully accused of intervening in every protest or rally in the country.

The statistics also show that 21,993 protests and rallies were held in the country from January to May 19, 2014 and the police only intervened to 535 protests or rallies, about 2.5 percent of overall events.

The Interior Ministry also presented statistics related to the nationwide Gezi Park protests that started in the summer of 2013. A total of 670 investigations were launched into Gezi Park-related incidents and 279 of them are still underway. Civil lawsuits were filed following 271 investigations and 25 cases ended up with the acquittal of all defendants involved while others are ongoing. One hundred and twenty cases were dismissed by the courts. Statistics show 4,479 suspects were included in those investigations but none of them were currently in detention as they are released pending trial or probation.

As for the police's actions during the Gezi Park protests, the statistics show that 329 investigations were launched into disproportionate use of force, misuse of authority and injury (inflicted on protesters) by police officers and 59 of them were dismissed by the courts in 13 cities. Other investigations are still underway.

Turkish police's use of force in protests is often subject to criticism. It particularly came under fire during the Gezi Park protests that left several people dead. Trials into deaths of protesters are ongoing. One case involves the death of Ali İsmail Korkmaz, a 19-year-old protester, who was allegedly beaten to death by police officers and civilians during the protests in the western city of Eskişehir. Four police officers are standing trial for his death.

The Interior Ministry acknowledged the use of disproportionate force during the Gezi Park protests but it justified it on the grounds that the use of force was necessary in the face of violent rioters who hurled Molotov cocktails and stones at intervening police.
Last Update: Jun 17, 2014 1:21 am
RELATED TOPICS