Ceylanpınar: The largest irrigated agricultural land in the world 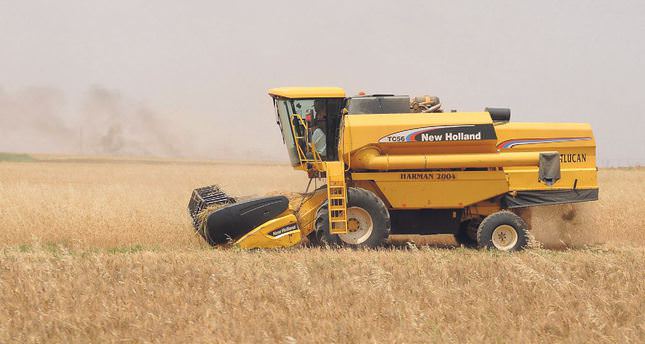 by Daily Sabah Jun 19, 2014 12:00 am
Responsible for the production and distribution of certified seeds in Turkey, the General Directorate of Agricultural Enterprises (TİGEM) thinks drought and the corresponding contraction of production at home and abroad is a problem to be solved immediately, considering the future of Turkey. For this purpose, Turkey's largest irrigation and mechanization projects were implemented in the Ceylanpınar Agricultural Enterprise, which constitutes 51 percent of TİGEM's total land assets.

The Ceylanpınar Agricultural Enterprise, with 1,761,261 decares of land assets, is the biggest farm in the world. The project, responsible for the irrigation of 500,000 decares of land using groundwater potential, was started in 2009 and completed at the end of 2011, at a cost of TL 300 million.

The most important feature of the Ceylanpınar State Farm is that uninterrupted irrigation can be done throughout the 609,000 decares at the same time. In addition, 310,000 acres of land will be irrigated by means of the Mardin-Ceylanpınar Main Irrigation Canal, which will be constructed within the framework of the GAP Action Plan. Thus, irrigation of nearly 920,000 hectares of land in Ceylanpınar will be ensured in 2016. With this feature, the Ceylanpınar Agricultural Enterprise is the biggest farm with the biggest uninterrupted irrigated area in the world.

The biennial production of wheat, 280 kg/decare, increased 3.6 fold each year to 500 kg/decare, and the amount of certified cereal seeds increased from 63,000 tons to 225,000 tons. The certified seed grain needs of the provinces located within the scope of GAP and the important parts of other provinces are substantially met. In irrigated areas, wheat, cotton, lentils, sunflower, forage crops and corn are produced. Irrigated areas are planted each year, and an average of 500 kg/decare of wheat is taken. The capacity of the seed processing plant has increased to 90 tons/hour thanks to the investments provided in recent years. An average of 650 tons of pistachios is produced annually.

Cattle farming activities constitute an important part of livestock operations of Ceylanpınar. The cattle-raising activities are mainly carried out by the Gökçay Cattle Raising Unit. In this unit, high-tech milking for 60 cattle and herd management systems are available. In the enterprise, sheep-raising activities are conducted together with both extensive and intensive cultivation. Sheep raising facilities are on 11 different sites that are barren lands and not suitable for other agricultural activities.

The main objective of the sale of gazelles is to protect this species from extinct and increase their population, rather than getting any income for the enterprise. Nearly 150 gazelle are sold every year. Along with new irrigation land, 74 technical and administrative contracted officers, 473 permanent workers and 903 contract workers have been added to the total of 1,450 employees who are employed to meet the increasing business. As a result of the commissioning of the project, a total of 3,670 additional jobs will be provided.
Last Update: Jun 26, 2014 8:46 pm
RELATED TOPICS