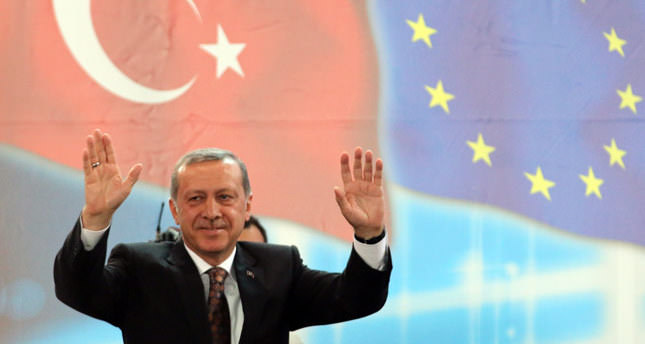 by AA Jun 19, 2014 12:00 am
A Europe without Turkey is unimaginable, Turkey's Prime Minister Recep Tayyip Erdogan said at a speech in Austria's capital Vienna on Thursday.

At a rally for 10th anniversary of the Union of Turkish Democrats, Ergodan said Turkey would contribute to the European Union with its growing economy and young population.

"Turkey will not give up on the EU membership process and will continue its efforts to join the union," he said. "We have come to Vienna to conquer hearts and nobody should be afraid of us or extract any meanings otherwise, if the prime minister of the Republic of Turkey has come to meet his expatriates in Europe."

Erdogan paid his gratitude to the Austrian government for hosting Turkish female students who wore headscarves, even while they had been refused education in Turkey because of a law imposed in 1984.

He stressed that the government has lifted the "meaningless" prohibitions and restrictions on wearing headscarves in Turkish universities.

Erdogan hailed economic progress made in Turkey under his party's rule, saying: "Turkish expatriates in Europe should not only be proud of their ancestors but their homeland - the Republic of Turkey."