Verdict hailed as a victory for democracy 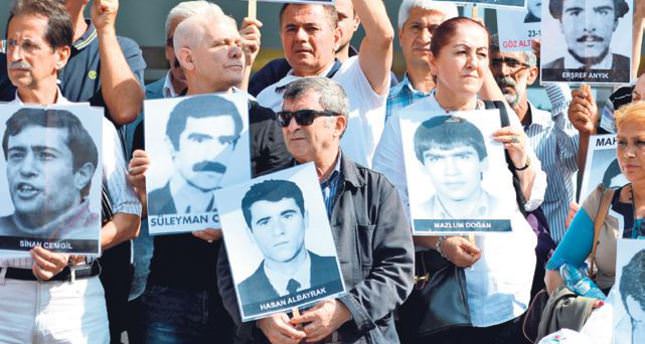 by Daily Sabah with Agencies Jun 19, 2014 12:00 am
The families of those executed or went missing after the Sept. 12, 1980 coup praised the court's decision and said the conviction of the two generals symbolized the condemnation of the entire coup regime.

Although their pain still lingers years later, families and friends of people who died in detention, were executed by the coup or "went missing," appreciated the conclusion of a trial that resulted in a guilty verdict.

Mehmet Horuş, one of the lawyers for families who were plaintiffs in the trial, said the verdict convicted not only two men but also the entire coup regime of 1980. "It is good news for Turkey's democracy and for those who fought for democracy and paid a price for it," he said. "The judiciary did what it was supposed to do. Now, we need a political struggle against laws and institutions enacted and set up by the coup regime," he stated.

Nejat Kangal, the head of a nongovernmental organization of political activists who survived the coup, said their lengthy struggle for the punishment of coup leaders has come to an end. "They were already guilty in public opinion, and the court reaffirmed the people's verdict today," he said. Kangal also handed over a letter written by Ali Aktaş, an activist who was executed by the coup, to her mother after the hearing ended. The letter penned by Aktaş was not delivered to her mother for years, as the coup officials prevented its delivery. "It is important that those killers who ordered midnight executions for our friends and ordered our torture were sentenced to life. This verdict is significant for democracy, for Turkey's future, for preventing future coups and continuation of national will,"

Remzi Çayır, head of a nongovernmental organization of nationalist activists who suffered under the coup regime, said. The first reaction from the ruling Justice and Development Party (AK Party) was by a lawmaker. Şamil Tayyar tweeted "good news" and said he hoped it would be a lesson for "anyone planning a coup."
RELATED TOPICS