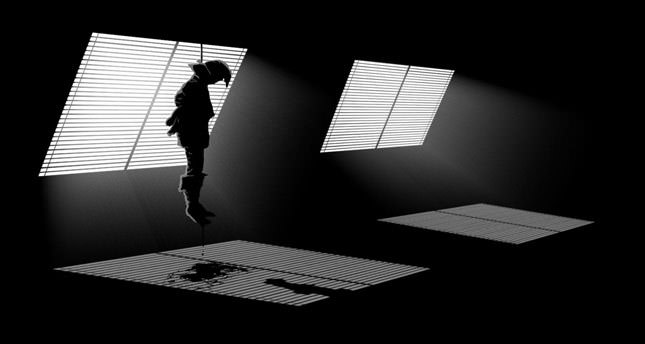 A total of 3,189 people took their own lives in 2013, according to the statistics compiled from data provided by the Turkish security forces. The crude suicide rate was 4.19, meaning every four people out of 100,000 people committed suicide.

Karaman, a central province with a population slightly above 230,000, has the highest crude suicide rate at 9.33 per 100,000 people. It is followed by Ardahan in the northeast, Bingöl and Elazığ in the southeast. The lowest rate, at 0.74 per 100,000 people was in Gümüşhane, a province in country's Black Sea region in the north and it was followed by Rize, another Black Sea province and Tokat in northern Turkey.

Suicide rates are particularly high among elderly people, namely those age 75 and above, while the lowest suicide rate was recorded between the ages of 35 and 39.

In 53.8 percent of suicides, the motive could not be determined. The findings showed that 16.1 percent of people committed suicide because they could not cope with severe illnesses and 9.3 percent took their own lives because of family-related problems. Poverty was cited at the reason for 6.9 percent of suicides while 3.3 percent committed suicide due to problems in their relationships such as unrequited love or their families' objection to their marriages. Another 1.9 percent killed themselves after they went bankrupt or due to high debts and 0.5 percent committed suicide when they failed at school.

As for the type of suicides, 50.9 percent took their lives by hanging themselves. Suicide by use of firearms accounted for 25.5 percent.
Statistics also showed a large percentage of those who committed suicide were primary school graduates. It was followed by high school graduates with 14.2 percent. Suicide rates decreased compared to 2012, from 3.287, the highest number since 2001, to 3.189.

The figure is relatively low in a country with a population of 76 million despite a slight increase in the past decade while the suicide rates saw an upsurge in the EU, Canada and the U.S. between 2008 and 2010, according to a research recently published in the British Journal of Psychiatry. That study tentatively linked the rise in suicides to economic recession.
RELATED TOPICS