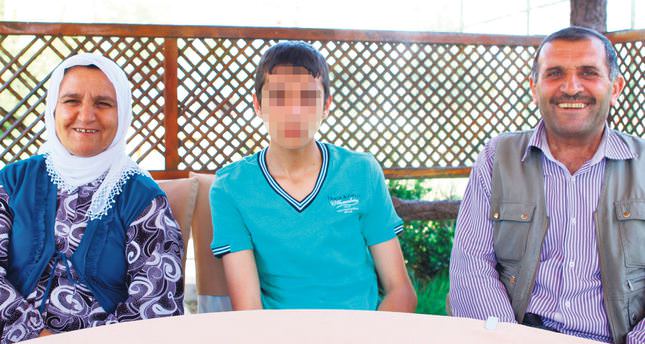 The PKK terrorist organization released a 15-year-old boy on Saturday following rising criticism over its recruitment of children which culminated at a sit-in protest by Kurdish families in southeastern Turkey. Yusuf Asan, 15, along with eight others, was brought to the southeastern province of Sırnak in March from his hometown Adana in southern Turkey to join the terrorist organization. On Saturday Asan turned himself in to the security forces. In his interrogation, he said he was put into a pickup truck and blindfolded by PKK militants on June 20 and then left in a central district of Sırnak.

From there, he traveled alone to Diyarbakır where his family was attending a sit-in protest against the PKK and surrendered. After a brief interrogation, Aşan was released and reunited with his parents in Diyarbakır's Dağkapı Square where a tent had been set up for sit-in protesters. His family was with other Kurdish parents who have been staging the protest since May 19.

Speaking to Anadolu Agency, his father Tahir Aşan said, "This is our happiest day. I hope no parents will suffer the same fate and will not cry. We hope all children will return to their families. I thank everyone who made it happen." Aşan added that they hope all of those in the "mountains" would return, referring to the PKK hideouts in the mountainous region. His mother, Şerivan Aşan, said she hoped other children who volunteered for the PKK would regret and return.

Şerivan Aşan said her son "deeply regretted" joining the PKK. "He wanted to return but he was scared. He was too weak when we met and I can still sense his fear," she said.

The young boy's reunion with his family drove other families in the sit-in protest to tears and boosted their hopes for the return of their own children.
Zeynep Baytok, whose son was recruited by the PKK, told İhlas News Agency that she was happy for the Aşan family, adding, "By God's will, our children will return too. We are devastated and we want our children back."

Bedriye Gözlügül, whose daughters were recruited by the PKK, said, "We would like to be happy like this family. I appeal to everyone to help bring back those children. I miss my daughters very much and will not leave this protest before they come back."

Earlier this week, the PKK announced it would send back child recruits below the age of 16. Dozens of Kurdish families have been staging a sit-in protest in the southeastern Turkish province of Diyarbakır since May 19, demanding the PKK return their children. Previously, only one 16-year-old girl was found by Turkish security forces in an operation against the terrorist organization.She has been reunited with her family who also participated in the Diyarbakır protest.

The PKK also released a Turkish soldier, Specialist Sergeant İlhan Çalışkan, on Saturday, who was abducted by militants who set his car on fire on May 27 in Diyarbakır's Hani district.

Çalışkan arrived in the city in the company of a delegation of the Peace and Democracy Party (BDP) and representatives of local nongovernmental organizations who arranged his release.

The BDP's Diyarbakır representative, Zübeyde Zümrüt, told reporters that Çalışkan was released upon a call by the jailed PKK leader Abdullah Öcalan. The terrorist organization has recently called on its supporters to stop abducting soldiers and civilians in southeastern and eastern Turkey after a recent rise in kidnappings.

However, seven locals who went to the forest to cut firewood in Şırnak province's Uludere district, were kidnapped by PKK militants yesterday.
Turkish security forces have launched a manhunt to find the abducted men. The PKK has stepped up its activities in the region following Turkey's decision to set up new military outposts.
RELATED TOPICS