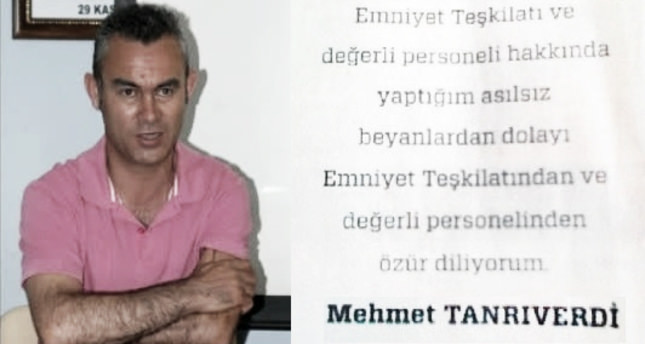 by Daily Sabah Jun 23, 2014 12:00 am
Mehmet Tanrıverdi, a teacher who claimed he was beaten by police after a rally to mark the anniversary of the Gezi Park protests, apologized to the Turkish police in a newspaper ad for lying about the beating.

Tanrıverdi, who attended the rally earlier this month in the western city of İzmir, had claimed he was beaten up by plainclothes police officers that took him to a secluded area after the rally. He claimed a police officer placed a gun in his mouth and threatened him. Prosecutors launched an investigation into the incident related by Tanrıverdi at a press conference. Inquiring about the license plate of the unmarked police car supplied by Tanrıverdi, investigators found it was not a police car and was not in the area that Tanrıverdi claimed at the time of the incident.

Further investigation based on cellphone signal of the plaintiff found that Tanrıverdi was not there as well at the time of the incident. Upon interrogation, Tanrıverdi confessed that he lied about the beating. He said he made up the story as a sympathy ploy for the wife he was separated from.

Tanrıverdi was sentenced to two-and-a-half months for lying about the beating, but his sentence was suspended. İzmir police told him they would retract a compensation lawsuit in exchange for an apology. Tanrıverdi issued an apology in an ad published in newspapers. "I apologize to the respected personnel of the National Police for my unfounded statements," the ad reads.