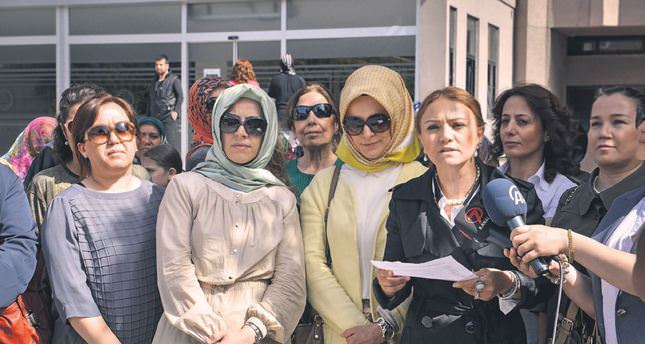 In its 66th hearing, the trial of 103 defendants accused of overthrowing the Turkish government through a so-called "postmodern coup" in 1997, resumed yesterday in Ankara after the case was referred to another court following legal amendments

All defendants in the trial including top generals who served at the time of the coup were released pending trial last year as the court ruled according to their pretrial detention period and that there was no possibility of tampering with evidence.

Defendants, lawyers and plaintiffs attended yesterday's hearing. Speaking as he opened the hearing, Fevzi Şıngır, chief judge of the court, said they aimed to ensure a fair trial.

The court was expected to hear the defense of Eser Şahan, a retired colonel who was serving as head of intelligence service at Naval Forces Command at the time of the coup, who was accused of conducting blacklisting operations.

Reşat Petek was chief prosecutor in the central Turkish city of Yozgat during the process leading to the infamous coup and also spoke as a plaintiff
at yesterday's hearing. Petek related his conversation with a Supreme Court member. "He was elected to the board of the Supreme Council of
Judges and Prosecutors (HSYK) - the ultimate authority in appointing judges and prosecutors. He told me they would not allow judiciary members with wives wearing headscarf to be promoted to the rank of chief prosecutor,"Petek said.

The Feb. 28 coup, which represented the culmination of a conflict between the secular elite represented by the army, bureaucracy and their affiliates and conservative elements of the society including the government, saw a massive witch hunt against the conservatives in the country. Wearing a headscarf, regarded as a symbol of political Islam by its critics at the time, was sufficient enough to be blacklisted according to conservative Muslims who suffered persecution during the coup process. "This Supreme Court member told me his mother was wearing headscarf as well but he implied that the army wanted them to blacklist the judiciary members," Petek stated.

Petek noted he also was tried for negligence of duty after he rejected to file an indictment against a local newspaper which allegedly published an article defaming the army.

He told the court that after he launched an investigation into officials of Erciyes University who did not allow headscarf-wearing students to attend the school, he was demoted and reassigned to Istanbul.

Speaking to the reporters, KADEM President Sare Aydın Yılmaz said the Feb. 28 coup process was "difficult and complicated" and had "thousands of victims." She said they found it odd that all defendants were released. "It is important for our democracy that rights of victims are restored and long delayed justice is served," she said.

Headscarf-wearing women were primary victims of the coup process. University and high school students were expelled from schools when they refused to remove their headscarf under a strictly enforced ban. Most students dropped out of schools and sought studying abroad.

The Feb. 28 coup against the so-called Islamist government of the Welfare Party (RP) took place in 1997; two years after the RP came to power. The rift between the government and the army, which saw itself as the defender of secularism, widened and evolved into an all-out conflict between so-called secular circles and the government.

On Feb. 28, 1997, the National Security Council convened and called on the government to comply with laws ensuring the secular state. This was followed by a lawsuit against RP in which chief prosecutor Vural Savaş demanded the closure of the party. In the face of these developments, Erbakan resigned from his post on June 18, 1997.
Last Update: Jun 28, 2014 11:04 am
RELATED TOPICS