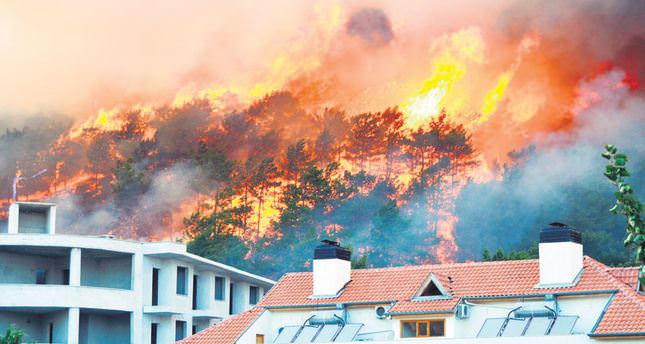 Heat, coupled with strong winds sparked a fire in the touristic Adrasan region in the south of the country. It took 16 hours to contain the blaze

A forest fire caused by summer heat and strong winds destroyed five hotels and other facilities over the weekend in one of Turkey's most popular tourist destinations on the Mediterranean coast. The fire in the Adrasan region, about 100 kilometers south of Antalya, began at 2 p.m. Saturday. Local officials said, 300 personnel, 40 fire trucks, 10 water tankers, seven helicopters and two amphibious planes were sent to the region to battle the fire.

Forestry and local firefighters mobilized to extinguish the blaze failed for hours. Efforts to contain the flames lasted 16 hours. Hundreds of tourists and locals were evacuated from the region on Saturday. Officials said there were no injuries reported, but they were taking no chances because the fire could light up once again if precautions were not taken. Helicopters and planes continued to pour sea water on the burnt out region in order to prevent a flare-up in the affected area. Ardasan's tourist industry has already been badly affected by the fire, with returning locals telling reporters that they no longer had jobs.

Devastating forest fires caused by scorching heat and human error frequently occur on Turkey's Aegean and Mediterranean coasts during summer. Similar fires also break out in Greece and Spain during the summer. Hayrettin Yasak, who used to work at one of the small hotels that were destroyed by the blaze, told Anadolu Agency (AA), "I have been working here for years and now I'm unemployed in the middle of the tourist season." Konak boarding house's owner İbrahim Onur said, "Half of the building was destroyed by the fire.

Houses were very close to each other and the intensity of the flames prevented the firefighters from intervening. Electricity was also cut off. Flames came out of nowhere. Firefighters arrived soon afterward but they couldn't do much." According to Antalya Forestry Department officials, the spread of the fire was stopped early on Sunday. Antalya Forestry Department General Manager Mustafa Türk said winds and the hilly terrain prevented firefighting equipment from reaching critical areas, forcing officials to resort to pouring water from planes and helicopters. "The only positive outcome is the fact that no one died," he said.