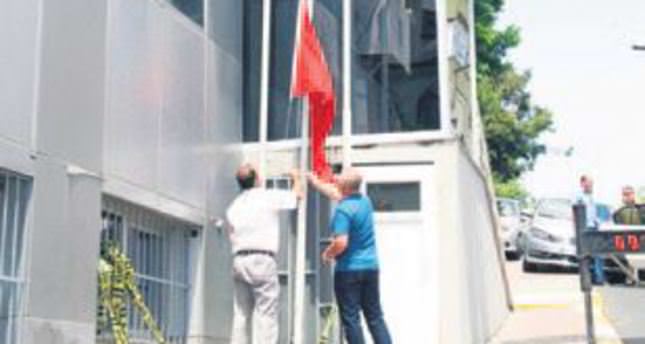 by Anadolu Agency Jun 30, 2014 12:00 am
A man was shot and wounded by police on Saturday when he attempted to remove a Turkish flag from a police station in Istanbul, local media reported. The incident follows a wave of anger across the country against the taking down of a Turkish flag earlier in June from a military base in the southeast.

A policeman shot the 28-year-old Ali Öçgün in the leg when he climbed a pole to pull down a Turkish flag at a police station in Gaziosmanpaşa, a workingclass district on Istanbul's European side. According to initial reports, Öçgün first went to Küçükköy Private Asya Hospital and took down the Turkish flag from a post outside the building. The suspect later went to Gaziosmanpaşa Police Department and took another flag down at the police station. When Öçgün attempted to take down the second flag he was shot in the leg after he rejected officers' call climb down from the post and surrender. The suspect was taken to Haseki Research and Education Hospital for treatment.

Istanbul Governor Hüseyin Avni Mutlu congratulated the police on his Twitter account. "I condemn the dirty hand that can still attack our glorious flag and seek provocation even on this holy day," he said, referring to the start of Ramadan, the Muslim month of fasting. A masked protester took down a Turkish flag from an air base earlier this month following fierce clashes in the southeastern city of Diyarbakir that left two dead. Turkish Prime Minister Recep Tayyip Erdoğan reacted furiously to the removal of "our sacred flag", warning whoever takes it down "will pay a price". The premier launched peace talks with the terrorist PKK in 2012, and the group declared a historic ceasefire in March last year. Erdoğan's government on Thursday submitted a raft of reforms to parliament to revive peace talks.
RELATED TOPICS