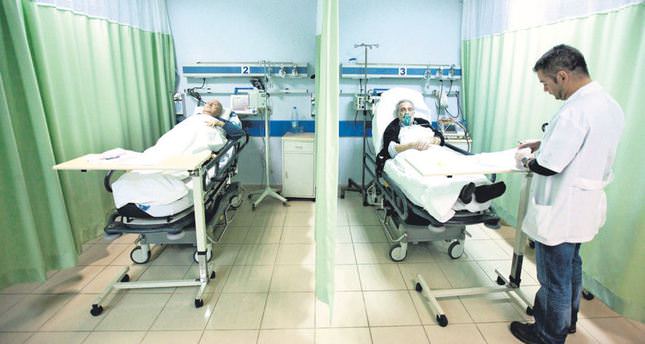 A report published by the Organization for Economic Cooperation and Development (OECD) indicates Turkey has taken significant steps in improving health services and that the general health of the public had also improved compared to recent years, but the country still has challenges in the health sector such as low health expenditure and a shortage of medical personnel

The 2014 health statistics published by the international organization shows Turkey secured the last spot among a list of OECD member states in 2012 for the share of health expenditure as a percentage of gross domestic product. Only 5.4 percent of gross domestic product is spent on health according to the report, way below the 9.3 percent average among OECD countries. The report shows 77 percent of health expenditure was supplied from public resources, above average compared to 72 percent in most OECD countries, and 14 percent higher than figures in 2000.

This rise is attributed to the Turkish government's efforts to expand the coverage of health insurance. "After a strong growth up to 2007, health spending growth in Turkey in real terms, adjusted for inflation, slowed down considerably in 2008 and was negative in 2009, but has gone back up since then, with a growth rate of more than 4 percent in 2012," the report said.

The report points to a rise in the supply of health workers in the last 10 years but underlines it was still below OECD standards. The doctors per individuals rate has considerably risen since 2000, from 1.0 doctor per 1,000 people in 2000 to 1.8 doctors in 2012, yet, this remains the lowest rate among OECD countries, below the average percentage of 3.2 in those countries. As for nurses, their numbers "moderately" increased from 1.3 nurses per 1,000 people in 2000 to 1.7 in 2012 but this is the lowest figure among OECD countries and well below the OECD average of 8.8.

The report praises Turkey's efforts to combat widespread smoking habits and notes that from 2000 to 2012 the country has achieved significant progress in reducing the number of smokers. The number of daily smokers among adults decreased to 24 percent in 2012 from 32 percent in 2003. However, the report adds the smoking rate among Turkish adults is still higher than the OECD average of 21 percent.

Turkey, the inspiration for the phrase "smoking like a Turk," had introduced comprehensive legislation against the unhealthy habit in 2009, banning smoking in all public places and was announced was by the sixth European Conference on Tobacco or Health as the fifth country among 34 others to have the most effective measures against smoking. The lowest rates among OECD countries are in Sweden, Iceland, Australia and the United States, where less than 15 percent of adults report smoking daily.

On obesity, the report said Turkey was behind other countries in terms of obesity, though it added that in nearly all OECD countries, obesity rates have increased over time. In 2011, more than one-in-five adults (22 percent) in Turkey was defined as being obese based on actual measures of their height and weight, lower than the rate in the United States which was 35 percent in 2012 and Mexico which was 32 percent in 2012. The report emphasized that prevalent obesity remains a key factor in health problems such as diabetes and cardiovascular disease and would lead to higher health care costs in the future. Cardiovascular disease ranks highest on the list of major causes of death in Turkey at 39.8 percent, with coronary artery disease as the leading cause of death in the category, according to the country's Statistical Institute (TÜİK). Cardiovascular disease is widespread in Turkey where obesity, due to a sedentary lifestyle, and smoking habits remain at a high level.

The following includes a list of Turkey's places across several OECD health statistics for 34 countries: 33rd in average life expectancy both for women and men, sixth in fatalities from cardiovascular diseases per 100,000 people, 33rd in cancer-related casualties, ninth in number of daily tobacco consumers, 34th in alcohol consumption among adults, 10th in number of obese people among 29 others, 34th in terms of health expenditure as a percent of gross domestic product and health expenditure per individual, 14th in public health expenditure and 31st in the number of hospital beds per 1,000 people. In the OECD statistics, the United States dominates health expenditures' share as a percentage of gross domestic product with 16.9 percent. The Netherlands became the country allocating the most public resources to health, with total health spending accounting for 10 percent of gross domestic product. Greece dominates in number of doctors per individuals with 6.2 doctors for 1,000 people. Turkey and Chile share the lowest spot.
Last Update: Jul 02, 2014 1:44 am
RELATED TOPICS