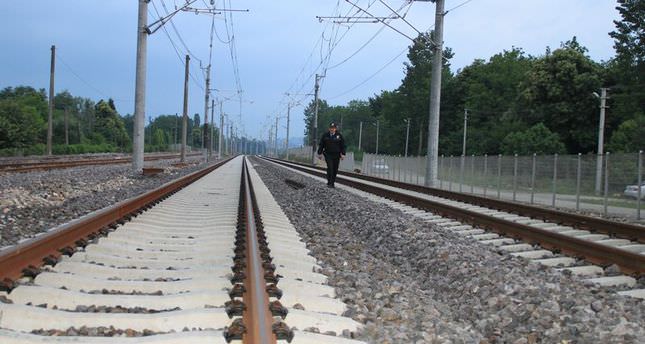 by AA Jul 03, 2014 12:00 am
The launch of Turkey's long-anticipated high-speed train service connecting the capital Ankara and Istanbul has been delayed again. Originally scheduled for July 5, the launch was postponed to July 11, Minister of Transportation, Maritime Affairs and Communications Lütfi Elvan Said.
Turkish media had reported earlier that the launch was delayed due to Elvan's illness. The minister denied the reports and said meticulous operations for the launch led to the delay and it may be further delayed or held earlier in line with Prime Minister Recep Tayyip Erdoğan's itinerary. Erdoğan will inaugurate the high-speed train service.

The launch has been delayed several times previously due to sabotage attempts and theft of cables and rails. Commandos were deployed along a part of the railway frequently targeted by saboteurs and thieves. High-speed train infrastructure was subject to cable thefts in the past and so far, a total of 20 kilometers of cable has been stolen but these thefts are attributed to petty criminals whereas authorities revealed deliberate sabotage attempts for over 200 occasions in the past months.

The high-speed train that will operate on a 533-kilometer long railroad will shorten the travel time between the capital and country's most populous city to three and a half hours from about five hours by car. The railway's section covering Ankara and the city of Eskişehir was opened in 2009. The railway will have nine stations in total including Ankara and the cities of Eskişehir, Bilecik, Sakarya, Kocaeli and Istanbul. It will be connected to Marmaray, the underwater tunnel in Istanbul's Bosporus, in 2015. The high-speed train will have the capacity to carry about 50,000 passengers daily and 17 million in a year.

The train is a government effort to modernize the country's railways and extend the existing ones. The government plans to invest $45 billion in railway systems by 2023 and construct 10,000 kilometers of high-speed train lines, along with 4,000 kilometers of conventional lines.