Fatal violence against women on the rise in Turkey 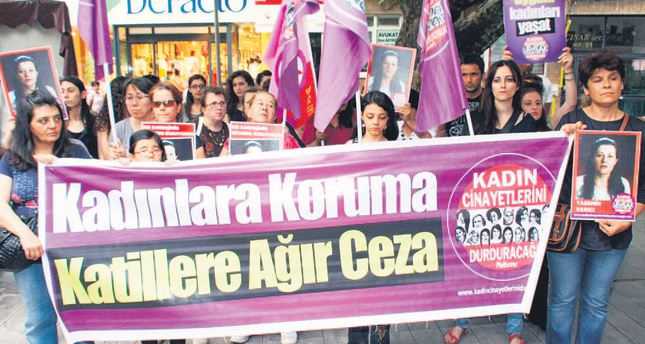 The government's latest legal regulations have encouraged women who have faced violence to voice their complaints. Women's awareness and improved recording cases of violence in recent years is linked to increased figures of violence

Even those who survived are marked for life. "Women who are abused never completely recover," said Pınar Çetinkaya, a social service expert and a volunteer at the Foundation for Women's Solidarity, a nongovernmental organization in Ankara. She said different factors may trigger their traumatic experience - even simply hearing a man's voice on the phone. "We are receiving repetitive calls from men who are abusive to their wives or girlfriends, asking about their whereabouts once they leave home," she said. It is very hard for women to end the violence perpetrated against them, said Fatma Bostan Ünsal, a faculty member at Muş University and board member at Capital City Women's Platform, an organization devoted to resolving women's issues. "To end violence against women, one must get to the bottom of the problem," Unsal said. "The issue is the power relation, where men see women as more inferior and less powerful compared to them, both in society, and in family interactions," she said. "The family must become an institution for both parties to have mutual respect, contentment, and reciprocity in order to reorganize those power relations," she said.

During the first half of 2014, 114 women were killed in Turkey - 21 had filed criminal complaints against their attackers - according to Umut Foundation, another nongovernmental organization that monitors violence against women. Those numbers are compiled by comprehensive media searches, according to Anıt Sayaç, the online record keeper, and the Umut Foundation. State institutions such as the Ministry of Justice and the Ministry of Family and Social Policy do not compile official data concerning violence against women.

Different data from various countries compiled by the U.N. Entity for Gender Equality and the Empowerment of Women, the violence against women prevalence data suggest that rates vary significantly between countries. In Turkey, 39.3 percent of women experience physical violence, while 15.3 percent are abused sexually by their intimate partners in their lifetime, according to a country survey prepared by and published on December 2012.
In India, these figures are 35.1 percent and 10 percent respectively, while in Italy the figures are around 12.2 percent and 6.1 percent respectively. "We are giving free legal and psychological consultation services and helping women in need settle in shelters," Çetinkaya said. The state should provide more human resources, and help assure continued funding for nongovernmental services, she said. The increasing number of victims might be the result of the more frequent coverage of such attacks by news organizations, showing greater societal recognition of the seriousness of such crimes, said Çetinkaya.

The European Union and Turkey are cooperating to fight violence against women with a joint project aimed at strengthening the nongovernmental institutions that promote the human rights of women. The joint project, called "Strengthening the Mechanism of Combatting Violence through Local Cooperations" aims to reduce the number of victims of domestic violence in three major provinces in Turkey: Ankara, Adana and İzmir.
It started Feb. 1 and will continue until April 30, 2015.

The EU has contributed about 138,000 euros. Coordinated by the Foundation for Women's Solidarity, the project is working in three areas: workshops and training, coordinating cooperation between women organizations in three cities, and organizing activities to raise awareness of the problem. "We will make house visits for an eightmonth period, with a minimum number of 20 women in a household in three cities," said Pınar Çetinkaya. "This is a hard topic for victimized women to talk about," she said. "These women mostly have difficulties in leaving their homes, so we decided to go to them. We will talk about their issues and discuss with them on what they can do in case they are subjected to violence - not only physical, but also psychological, sexual, economic and cultural violence."

The project will provide free legal and psychological consultation services for 10 months to women in need. At least a thousand women are expected to directly benefit from the project in its first eight months. After the project has concluded, many more will have access to various services with more effective NGO's working for women in need, organizers said.
RELATED TOPICS