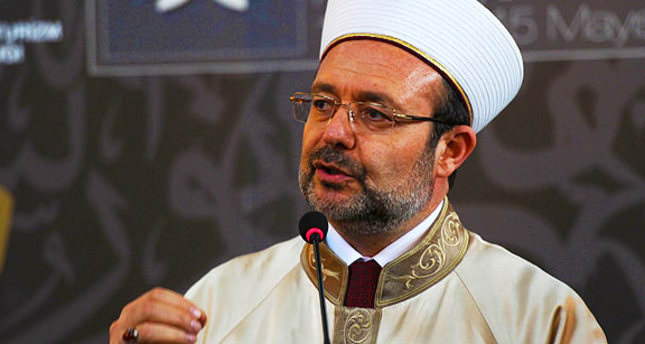 Görmez condemned the torching of the mosque and the other subsequent attack denying that the attack had any sectarian nature, echoing remarks by the Shiite community. "No true believer in the Quran and Prophet can commit such an attack. We are deeply saddened to witness such an incident in the month of Ramadan," he said. Görmez said the attack was "unprecedented" and an isolated case. "Still, we have to be careful [against sectarian strife]," he added. Quoting the Quran, Görmez stated those who destroy mosques were "the cruelest" among mankind.

He said that attacking a mosque attended by a different sect was completely against the teachings of Islam and has no place in Turkish society. "We are all citizens of Turkey and this kind of extremism has no place in Turkey. No Muslim can burn a Quran," he said.

A fire broke out at the Muhammediye Mosque located in the Yenikent neighborhood in Esenyurt, a working-class district on the European side of Istanbul on Tuesday.

The fire was started by one or more suspects who broke into the mosque and destroyed the imam's room, the mosque's small library which houses Qurans and other religious books and minbar (the pulpitlike platform where the imam delivers sermons).

The mosque's imam claimed he was threatened by an unidentified suspect weeks before the attack. He said the stranger told him "we will destroy you Jafaris," referring to the name given to the Shiite community in Turkey.

One suspect, who has past convictions for selling drugs, was arrested in connection with the arson on Wednesday. Two suspects were reported to vandalize the already damaged mosque on Wednesday. Locals claimed two assailants shouted they would not allow the mosque to remain open while fleeing after the attack.

Jafaris, who have a population of about 3 million in Turkey with 500,000 in Istanbul according to unofficial figures, have not faced any significant attack in the past.

However, another mosque in Esenyurt attended by Jafaris was subjected to an arson attack in June. That fire as well was blamed on suspected arson though no perpetrators have yet been caught. Jafaris worry about attempts to provoke sectarian strife, particularly in the face of ongoing conflicts in Iraq and Syria where a deeper rift between Sunnis and Shiites has emerged once again.