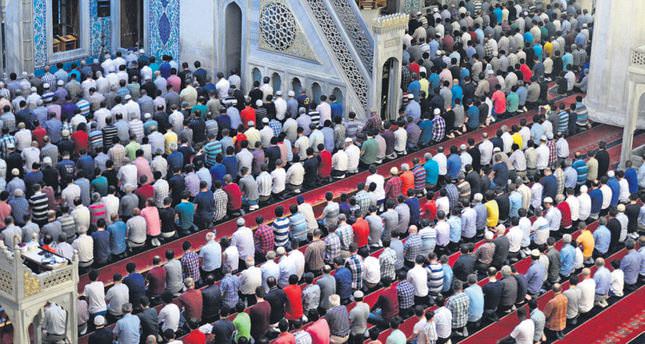 Turkey's Muslim population adhere more to Islam as they get older according to the results of a nationwide survey, which also confirmed that nearly 99 percent of the population is Muslim

A survey entitled "Religious Life in Turkey" was conducted by the Presidency of Religious Affairs or Diyanet İşleri Başkanlığı on religion and religious habits in Turkey. Surveys had previously been conducted on faith and religious life in the past but most of them were confined to one city or to a limited number of interviewees. For Diyanet's survey, 21,632 people were interviewed across the country which has a population over 76 million and 50.9 percent of them were women. All interviewees were aged 18 and above.

Almost all interviewees identified as Muslim while only 0.4 percent said they were of other faiths or do not believe in any religion at all. The majority of them, at 77.5 percent, followed the Hanafi madhhab or school of law interpreting religious rules while 11.1 percent were Shafi and 0.1 percent followed the Hanbali school. One percent responded that they followed the Jafari sect of Shia Islam and 6.3 percent described themselves as followers of none of these sects while 2.4 were not aware of his or her sect. "Turkey is a country whose population is 99 percent Muslim" has long been at the center of arguments related to country's religion but was often downplayed as an unofficial figure.

A majority of participants said they accepted all revelations in Quran as accurate and valid for people of all ages while only 1 percent expressed doubt. A large majority of the interviewees expressed their faith in the Day of Resurrection and Judgment and only 0.9 did not believe in resurrection and being held accountable for their sins and good deeds. Over 95 percent of the participants believe in the existence of angels, Satan and djinns.
Though an overwhelming majority are followers of Islam, figures of those observing the religion strictly remain low according to the survey. Piety among Muslims is high in rural parts of the country and among the elderly.

Another interesting finding in the survey is that the higher the level of education Muslim individuals have, the more they are inclined to skip daily prayers. The frequency of performing daily prayers is the highest among illiterate Muslims. The highest rate of attendance to prayers is for Friday prayers, a prayer that needs to be performed with a congregation and is obligatory exclusively for men. Over 57 percent of interviewees said they always attend Friday prayers and only 7.2 percent said they had never attended the Friday prayers. The highest attendance rate for Friday prayers was in central Turkey known for a concentration of country's conservative population while those in the western Marmara region in the northwest, where conservative lifestyle is relatively less common, attend the prayers least according to the survey.

The survey also examined Muslims' observance of fasting and giving zakat, a type of almsgiving obligatory for all Muslims considered wealthy enough. Over 83 percent fast as long as they are healthy while 2.5 percent said they never fast. The rate of women was higher among those regularly fasting. Those giving zakat annually are in majority while only 1.1 percent said they did not give zakat although they could afford to.

On the matter of going on a religious pilgrimage, a pillar of Islam compulsory for every able-bodied follower who can afford it, only 6.6 percent of interviewees performed the pilgrimage to Mecca and Medina known as Hajj. A large number of interviewees plan to perform it as soon as they can afford while a very small percent said they preferred to help the poor instead of spending money on a pilgrimage. As with all other religious duties examined in the survey, Hajj is popular among Turkey's Muslims aged 65 and above.

More than 71 percent of women interviewed said they covered their head while going out though they were not asked whether they regularly wear a headscarf or other forms of covering and 27.2 percent said they did not cover. Wearing headscarves or other items to cover the head is more common in rural parts of Turkey according to the survey. The main reason women cited for wearing a headscarf was that they believed it is an obligation of Islam. This reason was followed by family's pressure, adherence to customs and societal pressure respectively.

Less than 2 percent of interviewees said family and societal pressure were primary motives for wearing a headscarf while over 91 percent said they covered because they believe it is an Islamic obligation.

Amid other interesting findings of the survey is the high rate of Muslims believing that halal and haram, things and actions permissible and forbidden by Islam should be revised as their context has changed over the time and a contemporary approach is required.
Last Update: Jul 16, 2014 11:30 am
RELATED TOPICS