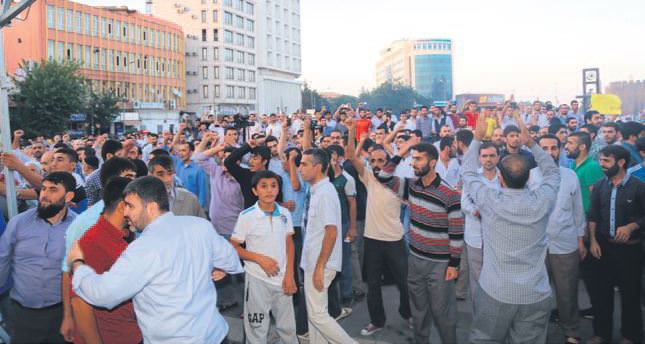 by Daily Sabah Jul 16, 2014 12:00 am
Protesters on Tuesday violently disrupted an iftar dinner organized by the U.S. Consulate in the southeastern Turkish province of Diyarbakır. Seven people, including a police officer, were injured in ensuing clashes between protesters and the police. John L. Espinoza, the U.S. Consul based in the southern province of Adana, condemned the attack at the event.

Members from 72 nongovernmental organizations, including labor groups, gathered in Dağkapı Square in Diyarbakır to boycott the function. Some among the group attacked the Diyarbakır municipality's tent where the dinner was due to take place, throwing eggs and firecrackers, and breaking tables and chairs. It remains unclear why the protesters attacked the iftar event, but it is suspected that it was a reaction to the U.S.'s support for Israel's military operations targeting Gaza. Diyarbakır Mayor Gülten Kışanak and members of her Peace and Democracy Party (BDP) visited the injured in the hospital. "We hosted a dinner event last year in the same place and it was welcomed by the local community," Espinoza said.

Espinoza remarked that the consulate believes that the protesters do not represent the residents of Diyarbakır, saying, "We support the right to protest, however, throwing dishes is an unacceptable act and we condemn that." "We will not allow anything to damage relations between Turkey and the United States," he added.

Diyarbakır Governor Mustafa Cahit Kıraç said two suspected assailants were detained at the scene. In a separate incident, a group of demonstrators confronted a truck belonging to Humanitarian Aid Foundation (İHH) in Hopa, a town of the northeastern Turkish province of Artvin. The truck was loaded with food for an iftar event in the town. Protesters, mostly activists from farleft groups, engaged in a quarrel with İHH
officials. Riot police dispersed the protesters.
Last Update: Jul 16, 2014 11:09 pm
RELATED TOPICS