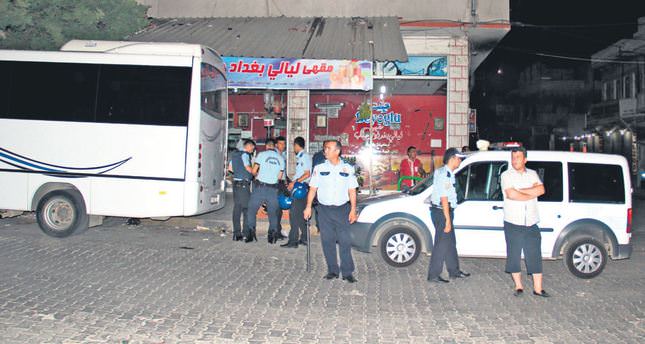 The rise in the number of Syrian refugees taking shelter is forcing Turkey to consider more measures, such as setting up new tent camps, while public outrage over the Syrian presence has escalated into riots

The steady stream of Syrians seeking refuge has turned into a cumbersome challenge for Turkey that is already hosting over 1 million Syrian refugees. Struggling to cope with the ever-increasing number of people crossing its borders, Turkey is planning new tent camps to accommodate them. Meanwhile, public outrage over Syrian refugees in Turkey is starting to bubble over and has occasionally erupted into mass riots, particularly in the border provinces that host a sizeable community of Syrians. On Tuesday, a group of locals in the southeastern province of Gaziantep attacked Syrians involved in a car crash that injured a Turkish woman and her five-year-old daughter. Seeing the car that ran into the mother and daughter had Syrian license plates, a group hurled stones at the car.

The Syrian occupants of the car sped away from the scene while the group chanted "Turkey!" and continued throwing stones at other Syrian cars passing by the scene. Police officers deployed at the scene persuaded the locals to disperse, but shortly thereafter the crowd converged in front of shops run by Syrians shouting "Turkey is ours," and waving Turkish flags.

The police did, however, prevent them from storming the shops. Some among the angry crowd were carrying pavement stones they removed from the ground, intent on trashing the shops. Fearing attacks, Syrian business owners removed Arabic signs from their store windows. Additional police forces were deployed in the neighborhoods where Syrians mostly reside. Ali Şahin, a lawmaker from the ruling Justice and Development Party (AK Party) for Gaziantep, tweeted that those involved in attacks were not "residents of Gaziantep." He claimed the attacks were "a provocation attempt to pit the population against Syrians."

Gaziantep, located on the border with Syria, has witnessed attacks against Syrians in the past, allegedly over an attack targeting Turkish children. Two dozen Syrians had to leave the city as angry Turkish crowds ransacked the places where they lived in May.

Kahramanmaraş, another southern city, has seen riots that targeted Syrians last week. Complaining that Syrians were committing crimes, a large crowd took to the streets and attempted to attack predominantly Syrian neighborhoods and stores operated by them. Rioters were back on the streets in the city on Tuesday night. Two assailants heavily damaged a car with Syrian license plates and were later detained by the police. Kahramanmaraş police also detained 25 people, including teenagers, who were among a crowd that convened in the city's Abdülhamithan neighborhood to stage an attack against Syrians.

Earlier this week, a masked group carrying meat cleavers stormed shops operated by Syrians in the southern province of Adana. It later turned out that the assailants were a gang seeking to extort money from shop owners. Turkey is the primary host for Syrians refugees who have taken shelter due to the civil war in Syria. Praised for exemplary conditions, Turkey has provided Syrian citizens with tent camps and state-of-art "container cities," although the Turkish government has had difficulty looking after others who are unable or unwilling to stay in the crowded camps. The country has already spent over $2.5 billion (TL 5.3 billion) to accommodate and help Syrians so far but it is overwhelmed as the international community remains reluctant to help Turkey cope with the surge in number of people fleeing the conflict in Syria. Twentytwo refugee camps across the Syrian border can accommodate only a small fraction of the desperate people seeking shelter, which is currently slightly above 218,000. Though more tent camps are planned, it is obvious that with a figure above 1 million, larger than the populations of many border cities, Turkey will continue to confront more problems as long as the conflict continues.

While those with a relatively good income start up new lives in Turkish cities by setting up businesses and buying houses, most Syrians displaced by the conflict are those from low-income families. They live in squalid conditions in abandoned buildings and parks and work for long hours in low-paying jobs without any social security.

Istanbul, Turkey's largest city with a population over 14 million, already struggling with migration from other Turkish cities, is among the cities attracting impoverished and wealthy Syrians alike. Istanbul Governor Hüseyin Avni Mutlu told reporters on Tuesday there were now 67,000 Syrians in the city, although this is only a figure based on those registered as Syrian citizens, while many others remain unregistered. Mutlu said the governorate planned "serious" measures to help poor Syrians who often turn to panhandling. He implied those measures will include sending them to tent camps in southern cities "without their consent." He noted a small number of Syrians in Istanbul was already sent to the camps.
Mutlu said representatives of the Syrian community in Istanbul were disappointed to see their compatriots begging on Istanbul's streets. "They told me those people tarnish their image [as guests of Turkey]," Mutlu stated.

Turkey has 22 refugee camps allocated for Syrians that house a total of 218,632 people while the remaining Syrians displaced by the civil war stay elsewhere across the country. "This is a very large population, yet we have been capable of handling the situation without any problems in four years. Our camps are exemplary in terms of their organization and coordination," Deputy Prime Minister Beşir Atalay said recently.

Turkey, along with Syria's other neighbors Lebanon, Jordan and Iraq, saw an influx of refugees fleeing the conflict in Syria almost on a daily basis. The country, which shares a 915 kilometer border with Syria, maintains an "open-door policy" for Syrians whom it describes as "guests" since they are expected to return home after the conflict is over even though there is apparently no end in sight and no side gaining an upper hand over the last four years.

Another problem for Turkish authorities is those refusing to live in the camps for a variety of reasons - and despite this, the camps are not sufficient to host all of the Syrian refugees. The country did not announce any new camps for Syrians except one that will house 20,000 people that will be constructed in İslahiye, a district of Gaziantep.
Last Update: Jul 16, 2014 11:06 pm
RELATED TOPICS