Renewed trial on the murder of Turkish-Armenian journalist adjourned 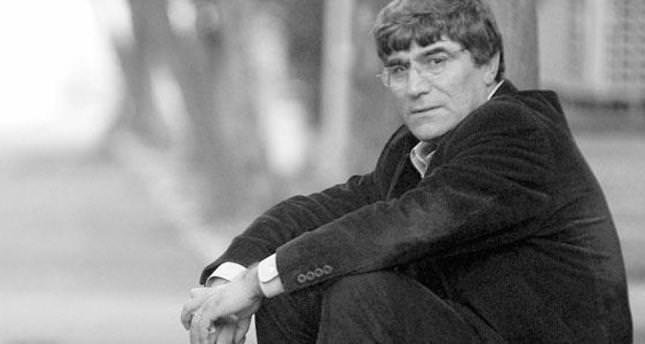 by Daily Sabah Jul 18, 2014 12:00 am
The trial of defendants for the murder of Hrant Dink, a Turkish-Armenian journalist assassinated in 2007, resumed yesterday at an Istanbul court after the case was transferred to a new court following legal amendments and after a verdict by a higher court ordering a retrial.

Eighteen suspects stand trial for the murder but none of them attended yesterday's hearing while lawyers for Dink's family attended the hearing.
Lawyers argued for a separate trial for Ahmet İskender, the sole suspect who remains at large, claiming his absence was dragging the case but the court rejected it and adjourned the trial to Oct. 30. Judges ruled İskender's case would be separated if he cannot be captured until the next hearing.
Ahmet İskender is accused of masterminding the murder with the other defendants.

A group of activists calling themselves "Friends of Hrant" made a press statement outside the courthouse on the sidelines of the hearing. Speaking on behalf of the group, film director Onur Ünlü said they expected all public officials responsible for the murder to be tried and punished. "The state should be held accountable for this murder. Only then, its condolence to the Dink family would be meaningful. We will continue our fight to reveal those behind the murder. The trial will not be over for us until then," he said.

A new investigation into the murder showed previous prosecutors who worked on the case ignored serious allegations into the involvement of top police officers in the murder. Those prosecutors are accused of having ties with the controversial Gülen Movement, whose widespread infiltration of the judiciary and police enabled them to influence the cases or fabricate them for their own interests. A new investigation into the murder revealed that a large amount of evidence and many allegations were dismissed by the prosecutors who once handled the case. Those included the dismissal of allegations about Ramazan Akyürek and Ali Fuat Yılmazer, two top police chiefs loyal to the Gülen Movement who were accused of helping the murder suspects.
Last Update: Jul 18, 2014 12:02 pm
RELATED TOPICS