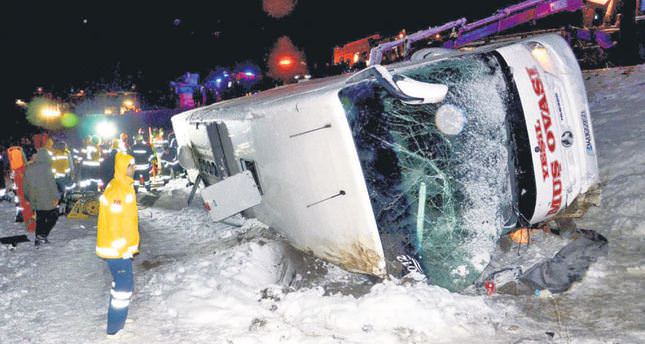 According to Turkish Statistical Institute figures released yesterday, 3,685 people died in 161,306 accidents in 2013, a decline of 6.88 percent compared to the previous year. Drivers made up 42.8 percent of the deaths.

The Turkish Statistical Institute (TÜİK) released yesterday figures on traffic accidents in 2013. The number of accidents was 1.2 million, showing a 6.88 percent drop from 2012 figure

The report showed that 3,685 people were killed in 161,306 accidents and another 274,829 people were injured. The majority of accidents did not involve casualties. According to the TÜİK's figures, 74.5 percent of fatal accidents occurred in cities, towns, villages and other settlements while the remaining 33.3 percent were occurred near uninhabited areas such as on highways far from cities.

Although the statistics showed a decline in the number of accidents , the figure is still quite high when compared to earlier this decade. For instance, only 537,352 accidents occurred in 2004, though the fatalities, at 4,427, were higher than fatalities in 2013.

More than 1 million accidents have been recorded since 2009 with roughly 12 people dying in traffic accidents on a daily basis, according to the statistics. Reckless driving is the major cause of accidents - both motorists and pedestrians often violate traffic rules.

The government has undertaken a campaign against "the traffic monster," which at one point claimed more lives annually than natural disasters, terrorist attacks and crimes. Yet, despite strict enforcement of harsher fines and sentences against those violating traffic rules, motorists keep ignoring them. From 2004 to 2013, over 6 million cars were impounded as part of not paying fines in Turkey where the number of vehicles is nearing 18 million.