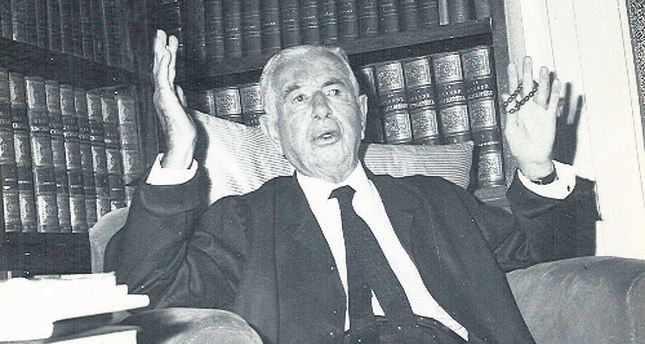 by Hakan Arslanbenzer Jul 19, 2014 12:00 am
Eleven presidents have served in Turkey since the establishment of the Republic. Though it was the Parliament that nominated and elected the president, according to law, this was only a matter of formality. There were severe arguments whenever Turkey needed a new president after the first president, Mustafa Kemal Atatürk died in 1938. Even the 1980 presidential elections in Parliament became a crisis that led to the Sept. 12, 1980 military coup. The military used the fact that the Parliament couldn't elect a president as a reason for the coup.

The first of the modern Turkish army's coups was on May 27, 1960. The coup overthrew the ruling Democrat Party. As a consequence, high ranking party members including the prime minister and the president were arrested by the military. Then the National Unity Committee was acting as the government.

However, the intention of the military was not ruling the country as a junta administration. They sought to establish a new government in line with their ideological expectations. The 1961 incident is interesting because it showed that the military would suppress any civil initiative for the establishment of the new government. In July 1961, the new Constitution was accepted and the Senate and the National Assembly were opened. It was then time to elect a new president. Though the military was not governing officially, they were the ones who made critical decisions - and the person elected should be one of them, a retired general.

Meanwhile, a disobedient civil politician, Ali Fuat Başgil announced his candidacy for the presidency from the Justice Party rows of the Senate. This stirred up the political environment and Başgil was invited to a meeting with two National Unity Committee members, Fahri Özdilek and Sıtkı Ulay. Ulay made an open threat to Başgil. He said, "You will give up your candidacy or they will kill you." Başgil resigned from the Senate and did not run against Cemal Gürsel, a retired general who everyone knew was the candidate of the army and not the civil Parliament.

Eventually, Gürsel was elected president and assumed office while Başgil gained a full but silent reputation of being a hero of civil democracy. Most people in Turkey do not remember who General Gürsel was, but Başgil's name remains alive.

Ali Fuat Başgil was born in 1893 in the Çarşamba district of Samsun, a province in the Black Sea region of Turkey. He was educated in Çarşamba before he joined the army to fight on the Caucasian front in World War I. He went to Istanbul after his military duty ended and began to try to find a way to continue his education. A family elder, Şevket Efendi, suggested he continue education in France. So young Ali Fuat departed for Paris in order to finish high school and later attend law school.

Başgil graduated from Grenoble Law School and received a Ph. D. from Paris University. He also received a diploma from the Philosophy and Political Science Departments of the same school and attended the La Haye Inter-State Law Academy.

Thus, Başgil returned to Istanbul in 1929 as a doctor of law with four diplomas. Ali Fuat Başgil's life in the 1930s was a success story. He worked as the assistant general director of the Higher Education Department. In 1930, he gave a dissertation on legal responsibility and became an assistant professor of law. He was professor of Roman law at Ankara University and also gave lectures on the history of civilizations at the Gazi Institution of Education. Later, he was professor of constitutional law at Istanbul University before he became the director of the Istanbul School of Commerce and Economics. He also was the acting dean of the Istanbul Faculty of Law before he was given the title of "attending professor."

In 1937, Başgil was the official consultant of law for the Turkish mission to the United Nations assembly in Geneva. He waso the committee responsible for preparing the Constitution of the Hatay Republic before it joined Turkey. He represented Turkey as a law consultant in many forums including the General Islamic Congress in Qarachi, Pakistan in 1952 and he attended various international law conferences.

Ali Fuat Başgil might have never thought of becoming a politician before he was arrested because of one of his articles where he criticized the Establishing Assembly of the 1960 military coup. He was imprisoned at the Balmumcu Military Prison in Istanbul until March 29, 1961. This deeply affected him and he decided to enter into and fully engage with politics.

In the 1961 Senate elections, Başgil was elected as an independent senator for Samsun province from the Justice Party list and entered the Senate of the Republic. Unfortunately, his presence in the Senate lasted only two weeks because of the events surrounding his presidential candidacy.
After the Senate formed, the next thing to do was to elect a president for Turkey. Since Ali Fuat Başgil was a senior law professor, right wing senators and Parliament members supported his presidential candidacy. Thus, Başgil announced his candidacy for president. This meant that he would be the fourth president of Turkey, because a great majority of Senate and Parliament members supported him.

However, National Unity Committee members did not agree with such civil candidacy. They were enthusiastic for the new president to be one of them, as in the old days - Atatürk and İnönü were retired army generals before they took office as president. Celal Bayar's Democratic Party era was not a good example for the soldiers and they tried to avoid such "irregularities."

Therefore, they asked Ali Fuat Başgil to pay them a visit. Two Committee members, General Fahrettin Özdilek and General Sıtkı Ulay threatened Başgil's life. Many years later, Sıtkı Ulay confessed to this meeting. According to Ulay, he said, "Leave the candidacy or they will kill you," to Başgil.
Ali Fuat Başgil gave up his presidential candidacy and resigned from the as well. He was a principled man and couldn't bear the situation. But he did not give up on politics and later entered two important elections.

One was for the leadership of the Justice Party where he lost against Süleyman Demirel, who later became prime minister and then president.
The other was for Parliament membership. Ali Fuat Başgil was elected as a Member of Parliament in the 1965 general elections. He was the chairman of the Constitutional Commission of Parliament until his death on April 17, 1967.

In addition to his being a professor of law and a politician, Ali Fuat Başgil was a writer as well. His life was a combination of action and thought. His life, until he was about forty years old, could be seen as a period of preparation. He was well educated in France, but it did not cause him alienation from his homeland and fellow people's culture. Başgil was always a conservative and religious person and his Western education just added to his knowledge. Başgil's political thought depended on a synthesis of Western democracy and Turkish domestic culture.

For instance, he defended secularism, but he opposed the oppression done in the name of secularism. Secularism should not mean hostility against religion. A second aspect of Ali Fuat Başgil's thought was constitutional law, of which he was an expert. Başgil was a right wing liberal democrat concerning constitutional matters. Freedom of thought and speech was a critical point in all his articles about democracy, secularism and the Constitution. Justice Party member Sadettin Bilgiç once said, "Ali Fuat Başgil was a mujahid of democracy."
RELATED TOPICS