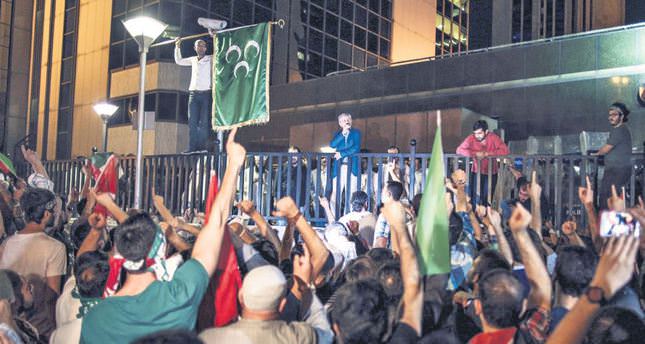 Israel's launch of a land offensive in Gaza, the latest move in a string of indiscriminate attacks, angered Turkish protesters who rallied outside Israeli missions on Thursday night and Friday

Israel followed days of its air strikes with a land incursion into the beleaguered Gaza on Thursday while the death toll in its attacks topped 260.
Civilians including children fell victim to the 12 days of Israeli assaults to wipe out the Hamas faction and its affiliates and the arbitrary killings amounting to "genocide" according to its critics caused outrage in few countries, further fuelling anger against Israel in Turkey, a fierce advocate of Palestinians' rights.

The Israeli consulate in Levent district of Istanbul, was among the primary targets of demonstrators but all demonstrations until the one on Thursday concluded peacefully with protesters dispersing after reading out press statements condemning Israel. But the crowd gathered outside the plaza, where the consulate is located, and turned it up a notch, attempting to scale the walls surrounding the building.

Waving Palestinian and Turkish flags, the angry crowd shouted "Allahu Akbar" or "God is Great," a common slogan in rallies with Islamic undertones, and chanted slogans against "Zionist" Israel. Amid tight security measures, protesters approached the premises and sprayed anti-Israeli graffiti on the walls of the consulate's courtyard. Meanwhile, some protesters attempted to climb the walls and some succeeded in entering the courtyard. Hurling stones and eggs, they smashed building's windows after burning Israeli flags but the police intervened and fired water cannon and tear gas on intruders.

The confrontation between the police and demonstrators continued well into the early hours of Friday. Protesters left the scene hours later.

In the southern Turkish province of Adana, a group of protesters from a local nongovernmental organization, converged in front of the U.S. consulate and condemned Israel's attacks in Gaza. Demonstrators performed dawn prayers in front of the consulate before dispersing peacefully. Protests, mainly by nongovernmental organizations with a Muslim emphasis, were also held in other Turkish cities from Konya in central Turkey to İzmir in the west.

Following the protest outside its Istanbul consulate, Israeli Foreign Ministry released a statement on Friday and said the police had failed to protect its mission "in a blatant breach of diplomatic regulations." The ministry said Israel was reducing its diplomatic delegation to the "minimum required" after the protests. Families of Israeli diplomats will be evacuated. On Friday, protesters took to the streets again following noon prayers across the country. In the capital Ankara, a group of demonstrators from various nongovernmental organizations attended Friday prayers outside the Israeli embassy and were led by a young Palestinian activist. Demonstrators chanted slogans "Killer Israel, Get Out of Ankara" and "Close the embassy of
Zionists."
RELATED TOPICS