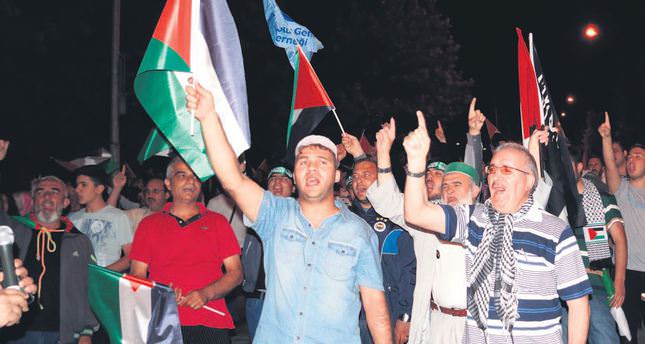 Protests against Israel by the Turkish public continue with a new boycott of Israeli products and companies linked to Israel. People have also been signing up to be human shields in Gaza, which has been battered by Israeli missiles day and night

The Israeli offensive in Gaza has left over 500 Palestinians, many of them women and children, dead, and has been incurring public's wrath in Turkey. Protests to condemn Israel became a daily activity all across the country. The Israeli consulate in Istanbul has been the primary target of protesters who have been camping outside the premises for days.

Still, protests are not the only way for Turks to vent their anger against Israel's brutal crackdown in Gaza. A boycott campaign against Israel initiated on social media websites is slowly finding nationwide support. Coca-Cola, accused of financially supporting Israel, has been boycotted heavily - the company's products have been removed from shelves in many businesses. Some municipalities announced that they banned sale of Coca-Cola drinks in restaurants and cafes operated by them. These currently include municipalities in the cities of Ordu in northern Turkey, Erzurum in the east, Denizli in the west, Nevşehir in central Turkey as well as many district municipalities in Istanbul including Başakşehir, Bağcılar, Üsküdar, Ümraniye and Esenler.

Tweets reading "Don't Drink Coca-Cola for Gaza," "We Will Not Contribute to War," "Boycott Cruel Israel and its corporate co-conspirators" have been shared widely.

Speaking to Anadolu Agency, Ordu Mayor Enver Yılmaz said they could not remain silent in the face of "Israel's oppression that turned into a humanitarian tragedy ... As Ordu municipality, we boycott killer Israel and the global capital supporting it and do not drink its products. We invite everyone to join this boycott."

Mehmet Tahmazoğlu, mayor of Şahinbey, a southeastern town, said they stopped selling Israeli-made products in stores and restaurants they operated "because every Israeli product we bought may end up funding a missile that could kill a Muslim."

The anger against Coca-Cola was not confined to boycott of its products. The Ayyıldız Team, a group of Turkish hackers, who describe themselves as "patriotic, nationalist Turks," launched cyber-attacks on some corporate websites of Coca-Cola on Sunday night. Hackers left a message: "Access denied to Coca-Cola in the name of innocent children killed in Gaza." The hackers pledged more cyber-attacks as long as the Israeli offensive continues.

While the boycott gained pace, protests continued as well with activists starting a "Gaza watch." For example, protesters outside the Israeli consulate in Istanbul are regularly replaced by others and keep their anti-Israeli rally active around the clock. In the southeastern province of Diyarbakır, activists from 69 nongovernmental organizations staged a night vigil for Palestinians.

After performing tarawih prayers, a night prayer exclusive to the holy month of Ramadan, protesters prayed for Palestinians killed in the Israeli attacks. Chanting slogans against Israel and its main ally, the U.S., protesters continued their rally well into the early hours of Monday in the city's Dağkapı Square.

Israeli embassy residence in the capital Ankara also saw an anti-Israeli protest late Sunday. A group of activists dispersed without incident after chanting slogans and calling for a boycott against Israel.

Israeli missions whose staff was downgraded to minimum after protests, is also the site of petition campaigns launched by Humanitarian Aid Foundation (İHH), a prominent Turkish charity known for its campaigns for Palestinians. Volunteers sign up to be a human shield in Gaza by signing the petitions at stands set up outside the embassy in Ankara and consulate in Istanbul. In a statement about the campaign, İHH officials said eighty percent of casualties were civilians and more than 50 children were killed in the Gaza attacks.

"This shows Israel deliberately fires upon civilians. Israel's new strategy is to kill the loved ones, families of insurgents (Hamas members) as most buildings hit by Israel are occupied by those families. More than 1.000 houses were razed to the ground in the attacks. Death toll keeps increasing as well as the number of the injured. It is time for everyone to take concrete steps for their brothers and sisters. We invite you to sign up to volunteer for being human shields," the statement reads