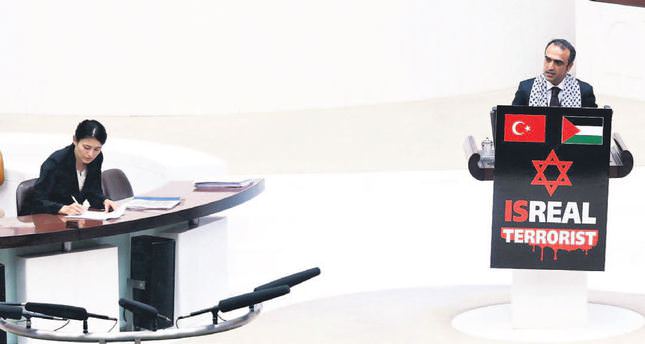 The Turkish public's outrage over Israel's brutal offensive in Gaza that has killed over 700 people, take a turn for the peculiar at times. Along with daily rallies, some citizens vent their fury at Coca-Cola

Israel's indiscriminate killings of Palestinians has drawn the ire of the Turkish public, which has been staging protests across the country since the offensive began on June 8. Masses have converged every day outside the Israeli consulate in Istanbul and embassy in the capital Ankara and some demonstrators have even attempted to storm the Israeli missions.

Demonstrations usually start in the evening and continue well into early morning during the holy month of Ramadan in which Muslims fast from dawn to dusk. Rallies condemning Israel are peaceful and some are even viewed as hackneyed.

Yet, some protesters yearning for creativity have come up with new ideas to denounce Israel's brutality. Ali Tokluman, a 45-year-old businessman from the central Turkish city of Kayseri, is one of them. Tokluman, who also serves as Kayseri director of a prominent charity, started a march to Gaza with his family. Accompanied by his wife, his sons Talha and Harun at the ages of 19 and 20 and daughter Zeynep, 18, Tokluman set out from Kayseri yesterday. "Zionists shed blood of Muslims every day but we stand here doing nothing. Islam is for the people and I have to act and stand against it," he said. Tokluman said they decided to give up everything and start a walk to Gaza at a family meeting. "Nothing can turn us back. We will show the world that the borders do not mean anything for people and the faithful can undertake any journey at any time no matter how difficult the journey can be," he said.

The last destination of the march within Turkish borders will be in Hatay, a southern Turkish province bordering with Syria. "We will check out our options for travel from there. It can be either through the land, air or sea.

Thousands of people sneak into Europe and other countries every month and I think we can manage to enter Gaza just like them," Ali Tokluman said. He said they "took every precaution" and planned to march at least 30 kilometers a day. They are expected to reach Hatay in 136 days. They will report the progress of their journey via a Facebook page entitled "We are marching to Gaza." "We will be in Gaza next year and fast together in Ramadan in Gaza because we believe that the Zionist blockade of Gaza will end by the next year," he said. He voiced hope that other protesters will join their march along the way.

Tokluman is no stranger to the Palestinian cause. He was one of the activists aboard Mavi Marmara, a Turkish vessel in the Gaza aid flotilla that was stormed by Israeli raids in 2010. Tokluman was injured in Israeli soldiers' attack on the vessel that left nine Turkish activists dead.

Although the Tokluman family's protest is a sane opposition to Israel's shelling of Gaza that amounts to "genocide" according to its critics, some Turks took their protest up a notch, like an anonymous man whose video of his boycott against Israel went viral. The man, believed to be a grocery store owner, is seen with Coca-Cola six-pack carriers on a sidewalk.

Grabbing large bottles of Coca-Cola, the man empties them on the street and crushes the plastic bottles while condemning "oppression of Muslims in Palestine, Egypt and Syria." "They crush Muslims and I crush their products," the man utters while looking over the puddle. Coca-Cola has been the target of a nationwide boycott in Turkey after a social media campaign reigniting long-dormant anger against multinational corporation accused of financing Israel's crackdown on Palestinians.

Although it is not known why the man in the video associated the famous beverage brand with violence towards pro-Morsi supporters in Egypt and Syrian regime's violent crackdown on the opposition, Coca-Cola almost became a symbol of hatred for Turks. The company already issued a statement denying any financial support to Israel but its name has long been remembered in anti-Israeli protests due to its investment in Israel by revoking its obligation to the Arab League boycott of Israel and rumors that it was funding events by extremist Israeli groups with strong anti-Palestinian views did not help either to erase this image. The boycott of Coca-Cola found widespread support especially among municipalities across the country.

Most municipalities that operate restaurants and cafes stopped the sale of Coca-Cola Company products while the boycott elsewhere remains confined mostly to small businesses as big-name restaurants still serve the popular beverage. On the other hand, the real Israeli products, such as dates, have not been affected by the boycott though anti-Israeli activists have exerted efforts through social media to inform the public about Israeli products. They publish barcode numbers for products made in Israel.

Most businesses tend to observe the boycott but business chambers warn the public that boycotting every brand whose name was published in the social media campaigns might endanger the economy. Chambers say some non-Israeli companies or products are wrongly included in the boycott as well. The boycott and other protests may be favored by a public angered at Israel but this is not the case everywhere. In Marmaris, a southwestern seaside town especially popular among British tourists, a call for a protest against Israel failed to draw attention.

Only 15 people showed up for the protest in the town whose population is over 34,000 and peak in the summer with a flow of tourists. Demonstrators sought support from tourists passing by while shouting anti-Israeli slogans and waving photos of Palestinians killed in the attacks. Bayram Kılıç, one of the demonstrators, said many Marmaris residents took to the streets in the 2013 Gezi Park protests but they were absent from a protest against Israel. "They could attend our rally even for a few minutes but they did not do it. If they do not attend our next rallies, we will go on a hunger strike," he said. Upon lack of interest, protesters dispersed. One of the most colorful, yet ineffective protests was in Ankara's Yenimahalle district.

Ercan Buyruk, a barber who often made the headlines with his stunts, remodeled the hair of his two customers with a peace sign and an Israeli aircraft dropping bombs on Palestinian children flying kite. Buyruk, who made it into Guiness Book of Records in 2009 by cutting the hair of 363 people in 24 hours, is known for offering haircuts in line with current events.

Following the military coup in Egypt, he had offered haircuts in the shape of Rabaa sign adopted by supporters of ousted president Mohamed Morsi. The protests are not confined to ordinary citizens. Cuma İçten, a lawmaker from the ruling Justice and Development Party (AK Party) attended a parliamentary session yesterday by donning a Palestinian keffiyeh. As he took to the pulpit for his speech, he unfurled a banner with Turkish and Palestinian flags and slogan "Isreal Terrorist" and hung it on the pulpit. Dedicating his speech to "martyrs of Palestine," İçten concluded his speech by reciting al-Fateha verses from the Quran which is recited for the deceased.

İçten said Palestine was "a bleeding wound for everyone. Innocent children, people are killed by terrorist Israel while the conscience of humanity dies. Shame on those who cannot call Israel a terrorist," he said.
Last Update: Jul 24, 2014 6:19 pm
RELATED TOPICS