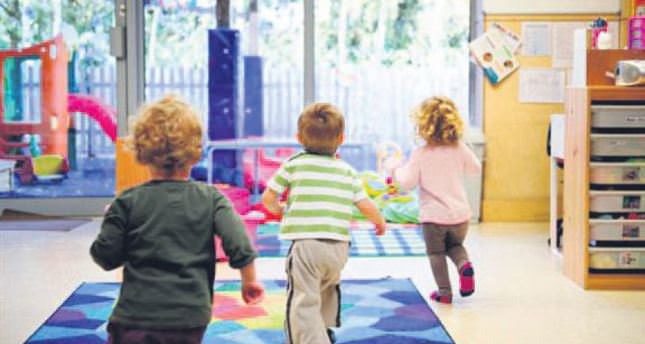 by Daily Sabah Jul 24, 2014 12:00 am
The Family and Social Policies Ministry has initiated a new campaign to set up daycare centers in industrial zones across the country in order to encourage female employment, with the first pilot center to be established in Adıyaman.

Daycare centers are being established at industrial zones in Turkey to encourage more women with families to work. Under a new project entitled "My Mother's Job, My Future," the first daycare center will be opened at the Organized Industrial Zone in Adıyaman, a province in the southeastern Turkey.

The Ministry of Family and Social Policies launched the project in cooperation with the Ministry of Science, Industry and Technology and Borusan Holdings.

Daycare centers will be set up in Organized Industrial Zones in 10 cities. Children up to the age of six will be cared for at these centers for a reduced cost, while their mothers work at factories and workshops.

Women's employment in Turkey has progressed over the past decade, although it is not yet at a desired level. Women's participation rate in the workforce rose to 30.8 percent by the end of 2013 from 23.3 percent in 2004, in line with Turkey's economic growth in the last decade. The employment rate among women rose after the government offered an employer premium to businesses hiring women and unemployed youth following the global economic crisis in 2008.

In accordance with a nationwide development plan, the government is seeking to increase those rates through establishing daycare centers.

However, despite the fact that women are increasingly entering the labor market, most of them leave their jobs after giving birth due to the high cost
of daycare.
RELATED TOPICS