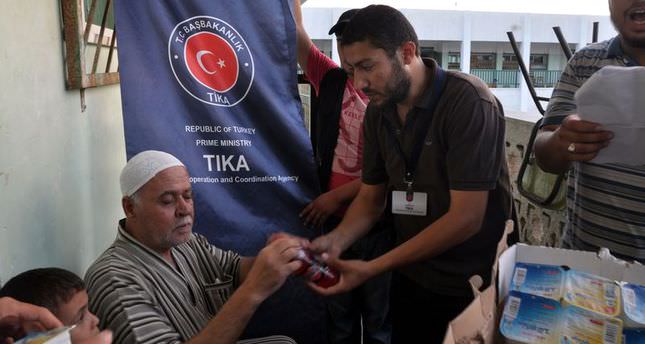 by AA Jul 24, 2014 12:00 am
The Turkish Co-operation and Co-ordination Agency (TİKA) has distributed 15,000 fast-breaking meals to Palestinians who have had to leave their homes after days of heavy Israeli attacks on Gaza.

"On Prime Minister Recep Tayyip Erdoğan's orders, we distributed fast-breaking packages to families who had suffered from Israeli attacks and who had had to leave their homes," said Muhammed Murteca, the agency's Gaza representative, in a statement to an AA reporter.

"Fifteen thousand fast-breaking packages were distributed to families who had escaped the neighborhood of Shujaya and taken refuge in schools belonging to the United Nations Relief and Works Agency for Palestine Refugees," said Murteca.

After three Jewish settlers who went missing were found dead following an 18-day long search in the West Bank on June 12, a Palestinian youth named Muhammed Ebu Hudayr was abducted by Jewish settlers and burnt to death on July 2. Following these events, Israel began its assault on Gaza with an operation named "Protective Edge," claiming that missiles targetting Israeli cities have been launched by Hamas. Israel launched an air force offensive on Gaza on July 7 and a full scale land operation on July 17.

So far, 732 Palestinian lives have been lost in Israeli attacks, and 4,563 people have been wounded.