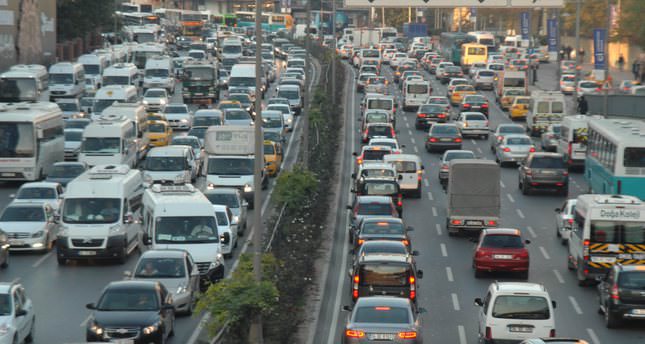 by Daily Sabah with AA Jul 25, 2014 12:00 am
Turkish authorities step up traffic inspections as the annual migration of millions on the occasion of next week's Eid al-Fitr begins in the country, a time the lethal traffic accidents peak.

This week Turkey will see a staggering internal migration of people as an estimated 7 million travelers – equal to the population of Switzerland – take to the roads and skies to meet family during the traditional "Bayram" or Eid al-Fitr holidays.

However, as the celebrations to mark the end of Ramadan nears, both the Turkish government and experts have issued warnings on travel safety. Departures to celebrate Eid al-Fitr have already begun with many additional flights and bus services scheduled for the holiday due to excessive demand. However, both Eid al-Fitr and Eid al-Adha are the peak seasons for traffic accidents. Last year, road accidents during Eid al-Adha left more than 110 dead nationwide and injured over 620 people.

Traffic police will increase the frequency of roadside inspections on major routes which tend to see the greatest density of traffic before eid. Inspections and measures will concentrate on roads where fatal accidents are common. Those are generally the roads in central Turkey, connecting the country's western, northern, southern and eastern provinces such as the highway between the capital Ankara and Istanbul.

Along with traffic patrols deployed on the roads, the Turkish National Police will deploy helicopters for aerial inspection of possible traffic violations. Trucks, tankers and other heavy vehicles may be banned from some routes where traffic snarls are common. Over 17,000 policemen will patrol the roads throughout the eve and three days of eid and the day after. They will work around the clock to ensure the safety of motorists and passengers. Undercover policemen will board the passenger buses on some routes to monitor the bus drivers against violation of road safety.

Traffic police will also inspect the bus drivers at stations. Long-distance bus drivers found to have not slept for hours, will be forced to take a rest before resuming driving at transit bus stations. Measures against sleepless drivers will also cover other motorists. If found nearly asleep behind the wheel at traffic checkpoints, drivers will be forced to leave their vehicles, get some sleep, wash their face and other precautions to prevent accidents.

The police are urging motorists to hit the road early in the morning due to high temperatures expected before the Eid. Authorities also warn motorists not to get behind the wheel with little sleep or in a tired state.

More than half of the traffic accidents occur between 12:00 and 16:00 according to statistics by the Turkish National Police and 29 percent of accidents stem from motorists ignoring speed limits.

Authorities also called on drivers to have their vehicles undergo a thorough maintenance before setting out a long-distance trip.

Road conditions were blamed for one percent of accidents and the rest was blamed on faulty cars and vehicle occupants other than the driver.

Reckless driving is the major cause of accidents – both motorists and pedestrians often violate traffic rules. The government has undertaken a campaign against "the traffic monster," which at one point claimed more lives annually than natural disasters, terrorist attacks and crimes. Yet, despite strict enforcement of harsher fines and sentences against those violating traffic rules, motorists continue to ignore them. From 2004 to 2013, over 6 million cars were impounded as part of not paying fines in Turkey where the number of vehicles is nearing 18 million.

Mehmet Timur, a 41-year-old crash victim from Istanbul, is just one of thousands of victims of traffic calamities. He lost both his wife and his leg in a traffic accident during the Ramadan feast of 2008.

"I did not only lose my leg; I lost my wife, my family and my job" Mehmet told Anadolu Agency.

After losing his wife at the scene and surviving in a coma for 11 days, Mehmet recalls: "It was nine-day holiday and, as taking advantage of an opportunity, we planned to visit our families in Ordu (the northeastern province of Turkey). We preferred to travel in our own car; I would drive throughout the journey as we planned.

"However, I felt sleepy. I know I should have asked my wife to drive the car instead of me but I kept driving without a break. It was around 3 a.m. and I slept. Then the only thing I can remember is tumbling down the cliff," he says.

Mehmet's story is not uncommon. According to both the Turkish Traffic Safety Association and the Suat Ayöz Traffic Victims' Association the main crash triggers are speeding and driving while tired.

"Traffic accidents do not just happen as a result of destiny; ignorance and laxity are the fatal errors people make," says Yeşim Ayöz, founder of Suat Ayöz Traffic Victims Association.

"Twenty-six out of 100 people who die in traffic accidents are children. One out of every 11 families is a traffic victim. We are destroying our future actually," Ayöz said.

Claiming more lives than terrorist attacks in the country, this "traffic terror" can be tamed only with education, says Ayöz: "We need zero tolerance against those who violate traffic rules. Even just obeying red lights can save thousands of lives." Ayöz herself suffered from "traffic terror." She founded the Traffic Victims Assocation in the name of her brother who was a victim of a hit-and-run accident in 2006 and six years later, the day her brother died, Ayöz's ex-husband was killed when he crashed his car on a slippery road.

Mehmet, who had been working as a mathematics teacher at a private school before the accident, is now supporting himself as a tutor. Stating that the seat belt saved his life, he said his wife did not fasten hers before the accident.

"I lived the biggest regret of my life; drowsy driving was madness. How could I do something like that? The only thing I can say to drivers is to be very careful in abiding by the traffic rules," he added.