Another Friday of protests against Israel in Turkey 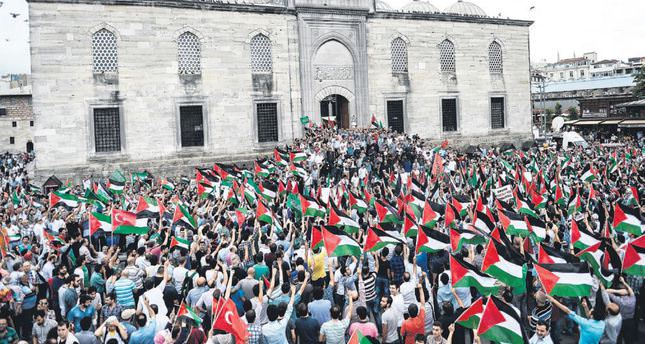 by Daily Sabah Jul 26, 2014 12:00 am
Turkish protesters took to the streets on Friday - World Quds (Jerusalem) Day - in the second week of demonstrations against Israel's brutal offensive in Gaza.

The death toll has risen above 800 in Israel's violent crackdown on Hamas, which has killed civilians including women and children, igniting more protests against the offensive.

A group of activists from several nongovernmental organizations and labor unions converged at Kocatepe Mosque in the capital Ankara following Friday prayers at noon. They then proceeded to march to the Israeli embassy where they left a child's coffin in front of the embassy residence and read a statement: "Israel, the murderer who kills our brothers and sisters and the West supports those murderers. We curse those supporting Israel."

Demonstrators called on the world to "witness the drama unfolding in Gaza and cut off support to the army of occupation that rains down bombs on Gaza."

In Istanbul, protesters convened outside Yeni Camii, a mosque in Istanbul's central Eminönü district, following Friday prayers. Chanting slogans in support of Palestinians and urging Turkey to cut off all relations with Israel, protesters denounced the Israeli offensive.

Protests against Israel were also held in cities across Turkey after Friday prayers. Some demonstrators performed funeral prayers for Palestinians killed in the Israeli operation.

Since the offensive began earlier this month, masses have converged every day outside the Israeli consulate in Istanbul and embassy in Ankara.

Some demonstrators even attempted to storm the Israeli missions. Demonstrations have usually started in the evening and continue well into the early morning during the holy month of Ramadan. The rallies condemning Israel have mainly been peaceful.
RELATED TOPICS