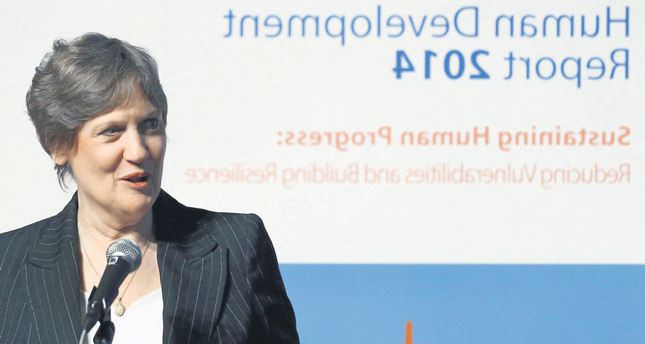 Turkey rose from the 90th to the 69th place in the annual UNDP Human Development report that ranks countries according to life expectancy, education, income figures and other indicators

The UNDP released the "Human Development Report 2014 Sustaining Human Progress, Reducing Vulnerabilities and Building Resilience" in Tokyo. The report lists 187 member countries of the U.N. and statistics on development in each. Turkey scored 0.759 in development points while Norway scored 0.944.

The country had scored 0.474 in 1980 and this score rose by a large margin to 0.722 in 2012. Among the various indicators determining a country's development is a country's life expectancy at birth. This was 78.7 for women and 71.8 for men in Turkey in 2013. The average years of schooling in Turkey were listed as 7.6 and expected years of schooling were 14.4 years in 2013 according to the report.

The report shows that the number of people forced to internally migrate for a variety of reasons varies between 954,000 and 1.2 million in Turkey according to the latest figures dating back to 2012 while this number is 2.1 million in Iraq. The report also shows that 73.4 percent of the population now lives in cities.

A survey accompanying the report determined that more than half of Turkish citizens are confident in national governance. On a question about the government's fight against poverty, 41 percent of participants said they were satisfied with anti-poverty efforts. As for confidence in each other, interviewees overwhelmingly expressed a lack of confidence in others.

The Turkish government, in line with achieving economic and social targets for its "2023 vision," implemented reforms in various fields to maintain growth and stability. Aiming to be one of the 10 biggest economies in the world, the country developed various strategies that include increasing per capita income to $25,000 (TL 52,260) and reducing unemployment to 5 percent.

Modern Turkey has seen numerous coups and coup attempts since its founding in 1923 and a string of weak coalition governments that stunted the country's economic growth efforts and effectively stifled socio-economic reforms. Turkey has now been ruled by the AK Party for over a decade, an unusually long tenure for a single political party to govern. The government is credited with boosting Turkey's place in the world while struggling with poor economic policies which are legacy of past governments.