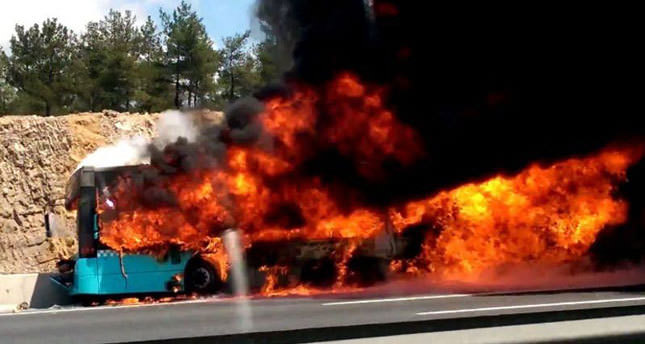 by Daily Sabah Jul 27, 2014 12:00 am
A public transportation bus on TEM highway headed towards the European side of Istanbul has crashed into the barriers in Kavacık on Sunday, killing three passengers and wounding many.

The bus burst into flames following the crash as passengers tried to get out amid an atmosphere of panic.

While the fire department came to the scene shortly after the crash, the bus was already swathed by fire by the time they arrived and extinguished the bus.

The wounded were transported to nearby hospitals while it was reported that the traffic was jammed on TEM highway due to the accident.

There are two scenarios for the cause of the incident. First suggests that the bus caught fire first and was stopped by the driver but some passengers could not get out and died. Second scenario suggests that a loose tire led the driver to steer towards the barriers when the bus crashed and caught onto fire.

Survivors have noted that it took five seconds for the bus to catch fire and could not identify the cause behind the incident.