A deadly Eid al-Fitr for Turkish motorists and swimmers, 108 dead 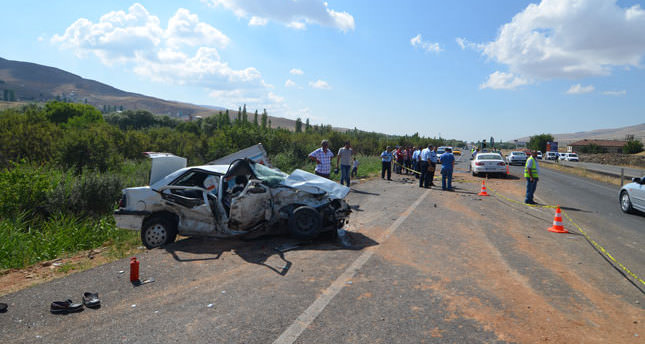 Traffic accidents over the course of Eid al-Fitr killed 92 people traveling on vacation, while 16 people looking for relief from scorching weather drowned during the past three days

Since Saturday, traffic accidents during the five-day holiday claimed 92 lives and injured hundreds while at least 16 people died by drowning. Traffic casualties skyrocket every year during the eid holidays.

This year's Eid al-Fitr, a religious holiday in Turkey, took a deadly toll on those rushing to holiday resorts for a fiveday vacation or their hometowns. Drowning incidents also saw a rise in the past three days, as more people took to swimming to escape from high temperatures bearing down on the country.

On Friday, people merging their weekends off with the three-day holiday for eid, which started on Monday, started travelling to beaches in the south and to their hometowns to visit their relatives on the occasion of eid. Fourteen people were killed, and 40 others were injured in separate accidents on Friday. On Saturday, the death toll in traffic accidents was 16, while 212 others were injured. Sunday was the eve of Eid al-Fitr and proved fatal for 22 people, while 164 people were injured.

Most accidents were blamed on drivers' ignorance of road safety and driving too fast to reach their destination. The death toll saw a rise compared to last year as 64 people were killed in 2013 in accidents, while 511 others were injured a day before the eve and throughout the eid.

Casualties were high although traffic police pledged to take measures to prevent traffic accidents such as regular inspections of vehicles for safety violations and stopping those driving too fast. Millions of travelers, especially from Istanbul and other cities in the northwest, have led to traffic snarls on major routes, and some frustrated motorists even returned home in the face of kilometers- long traffic jams.

Upon their way back home, travelers formed long lines on roads, particularly in the province of Kocaeli, a major gateway to Istanbul for those arriving from the northern, eastern and central parts of Turkey.

Drivers were forced to drive below 50 kilometers per hour due to heavy traffic, while the highway to the capital Ankara, a transportation hub
connecting the west to the east, was relatively empty. Additional ferry services to and from ports along the Marmara Sea between Istanbul and the west were announced to relieve traffic jams of travelers returning to Istanbul, a city of 14.1 million.

Turkey is notorious for the high number of traffic accidents, mainly blamed on reckless driving. In 2013, 1.2 million accidents took place, and over 3,600 people were killed in those accidents. Drowning accidents were also common throughout the three days of eid that saw temperatures rising as high as 34 degrees Celsius in some parts of the country. Sixteen people were killed in separate accidents.

Despite a ban in places dangerous for swimming, people braved rip currents and pollution, while others preferred to swim in deep pits filled with water in construction sites and other places. Not all those that drowned were swimmers.

In the central province of Konya, a 13-year-old boy fell into a river while fishing on Tuesday. His father, elder brother and uncle jumped into the river to save the boy, but they all fell victim to the river's strong current. The uncle's body was found on Tuesday, while the bodies of the two brothers and the father were recovered yesterday by divers.
Last Update: Jul 31, 2014 1:44 am
RELATED TOPICS