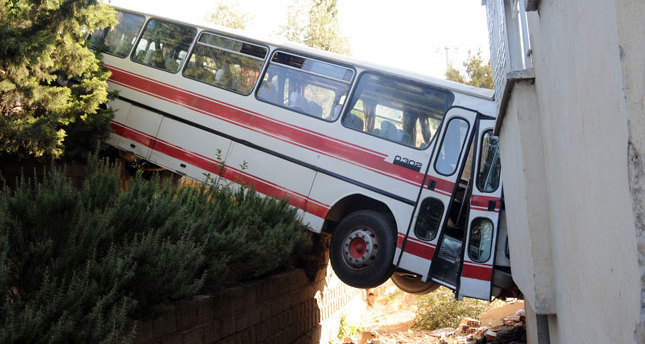 by Daily Sabah Jul 31, 2014 12:00 am
Two sisters were injured when a bus with a failed brake crashed into the balcony of a first-floor apartment in the southern Turkish province of Kahramanmaraş earlier yesterday.

Züleyha Doğru, 52, and Süreyya Kahveci, 54, were sleeping on their balcony due to excessively hot weather, in an apartment building located on a sloping street. The driver of a vacant bus crashed into the balcony when its brakes failed and the two women were crushed under the wreckage.
Their husbands rushed to the balcony and rescued the two women. Züleyha Doğru remains in critical care while her sister sustained slight injuries.
Residents of the apartment building said vehicles often crashed into their building though no casualties occured in the previous accidents attributed to a lack of measures forcing drivers to decrease their speed.
Last Update: Jul 31, 2014 1:46 am
RELATED TOPICS