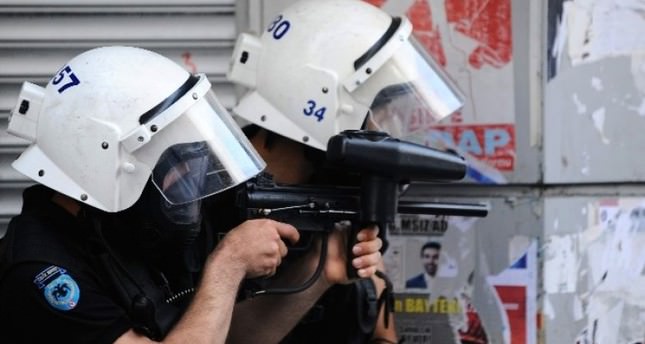 by Daily Sabah Jul 31, 2014 12:00 am
Supporters of two terrorist organizations clashed in Istanbul's Kağıthane district late Tuesday, after an attack by one group on a stand erected to promote presidential candidate Selahattin Demirtaş's election campaign.

A group from the People's Front, a grassroots movement for the terrorist organization, Revolutionary People's Liberation Party-Front (DHKP-C), protested the opening of a stand where leaflets for the Demirtaş campaign were distributed. They destroyed the stand and engaged in a brawl with Demirtaş supporters. More clashes broke out when a group from the Patriotic Revolutionary Youth Movement (YDG-H), an affiliate of the terrorist organization PKK confronted People's Front members.

It was reported that 12 people were injured in the clashes in Kağıthane's Nurtepe neighborhood, though this number was not confirmed by authorities. Issuing a message on Twitter, YDG-H members said they gave "an armed response" in return to gunfire from the Popular Front, but this report has not been confirmed either.

Riot police intervened in the clash between the groups who also damaged shops in the neighborhood. Security measures were elevated after the incidents.

Selahattin Demirtaş is candidate for the Aug. 10 presidential election from the Peoples' Democratic Party (HDP). The HDP is known for its ties to the PKK, which fights for Kurdish self-rule in southeastern Turkey.

The PKK and DHKP-C, both enjoy support in Kağıthane and Istanbul's other working- class districts, have long been hostile to each other. Although both groups boast fighting for a far-left ideology, they are at odds mainly over their ethnic composition.

Kurdish fringe groups support the PKK while DHKP-C finds support with Alevi fringe groups. Kağıthane is located near Okmeydanı, a district where both groups have incited riots and often clash with police.
Last Update: Jul 31, 2014 1:48 am
RELATED TOPICS