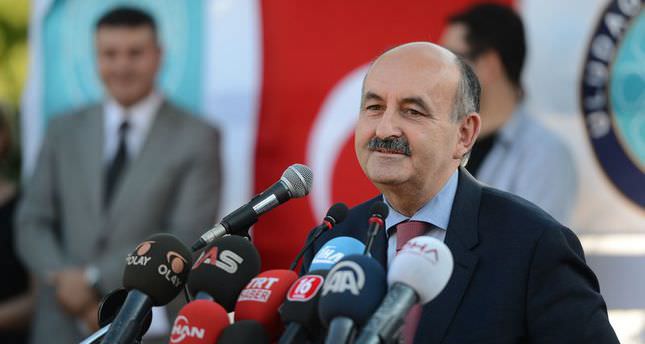 by AA Aug 01, 2014 12:00 am
Turkish Minister of Health Mehmet Müezzinoğlu said that the hookah (water pipe), described as hazardous to health as cigarettes, will be subject to regulations as strict as those for cigarette smoking to decrease its consumption.

The country, which earned a top spot amid countries with the most effective regulations for tobacco control, now turns to hookah, a popular habit among many Turks. The first step was public service announcements highlighting hookah's damage to health, and a series of conferences and seminars to raise awareness to the dangers of hookah.

Müezzinoğlu says one session of hookah is equal to smoking at least 50 cigarettes in terms of its effects on health, and leads to numerous cardiovascular diseases. "The younger population is particularly sensitive to our efforts for combatting smoking, and we expect same positive feedback for measures against hookah smoking," he said.

He notes that new additions to smoking regulations such as a ban on smoking at children's playgrounds, parks, near hospitals and shopping malls will also be in force for hookah.

Turkey has already a series of measures against hookah in place. Those include inspection against businesses and other places violating the ban on hookah smoking indoors, prohibition of opening hookah cafés near schools, sports and health facilities, and sale of hookah to people below 18 as well as ensuring hygiene of shared hookahs. Any ads, signs, et cetera, promoting the use of hookah are also punishable with fines. Hookahs are required to have warning labels about its effects on human health. Under planned regulations, tables in cafés where hookah is being served must be two meters apart, and the ceiling a minimum of six meters high. Thus, exposure to second-hand smoke can be minimized.