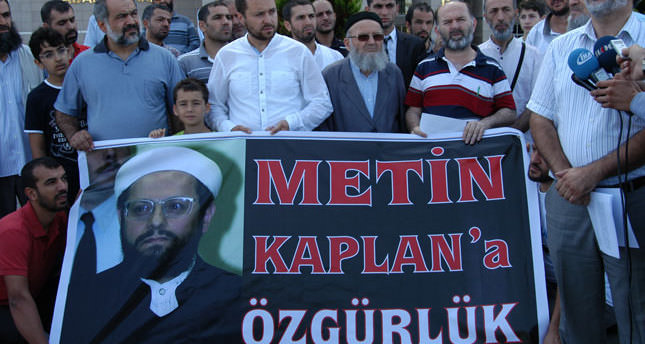 by daily sabah
Aug 02, 2014 12:00 am
Metin Kaplan, leader of an Islamic movement and known as the "Cologne Caliph" in the German city where he was based in the past, appealed to a Turkish court on Friday for a retrial of his case on charges of founding and running a terrorist organization.

Kaplan was sentenced to 17.5 years in 2010 on terror charges by a specially authorized Istanbul court that was recently abolished under new laws. He is currently serving time in a prison in northwestern Turkey.

Speaking to reporters after he filed an appeal in court, Halit Çelik, a lawyer for Kaplan, said his client has been in prison since 2004, including his pre-trial detention. "The sole basis for his conviction is a verdict handed down by the [now abolished] State Security Court, and this verdict in turn is based on my client's interrogation under torture," Çelik said. He also dismissed the incident that allegedly linked Kaplan to terrorism via the court's accusation that claimed Kaplan masterminded a plot to bomb Anıtkabir, the mausoleum of the Republic of Turkey's founder Atatürk. "The court ruled that two suspects accused of relations with Kaplan learned how to fly a plane by watching a pilot and that they planned to hijack a plane and carry out a suicide bombing on Anıtkabir. This accusation was sufficient to convict my client," he said. Çelik said Kaplan was a victim of Turkey's Feb. 28 coup that blacklisted and imprisoned conservative Muslims. "A fair retrial will uncover the truth and Kaplan will definitely be released since the evidence for his conviction was based on information extracted through torture," he stated.

Kaplan, leader of the Kalifatsstaat or Caliphate State, was extradited by Germany where he was arrested on charges of masterminding the murder of a rival. In 2005, he was convicted on charges of attempting to overthrow the regime and treason; however, he repeatedly denied that he had planned any acts of violence, although he admitted his desire for establishment of a sharia state in Turkey.