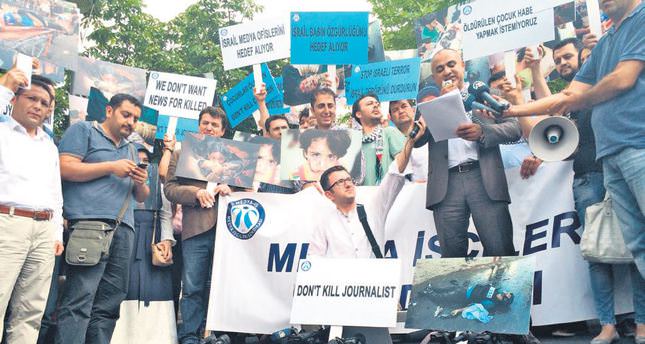 The crowd laid a black wreath to condemn Israel and called on Israel "not to kill" journalists. Ten journalists were killed during Israel's offensive targeting Gaza which started on July 7. Over 1,800 people were killed in Israel's indiscriminate attacks. Also, 38 journalists were injured while covering Israel's vicious crackdown in Gaza. Israel is accused of targeting Palestinian journalists, dropping bombs on their houses and workplaces.
Demonstrators carried photos of journalists killed in the attacks and chanted slogans against Israel. They also left their cameras in front of the embassy in protest.

Speaking on behalf of demonstrators, Gürsel Eser, head of Medya-İş, said most of the civilians killed in the Israeli attacks were children and mothers, and that journalists were the best witnesses of Israel's crimes. "Israel will be called to account one day for its crimes. One day photos, videos, stories by journalists will be evidence of Israel's crimes," he said. Eser said Israel stepped up its attacks targeting journalists recently and often threatened journalists to leave Gaza. "Israel first trampled on people's right to live and now tries to stifle press freedom and rain down bombs and missiles on the media members," he stated.

Eser said that Israel was responsible for the safety of journalists in Gaza and the West Bank but continued targeting journalists as an effort to cover up "a humanitarian tragedy." "Israel ignores the immunity of journalists covering conflicts provided by international agreements," Eser said. He also criticized U.S.-based Freedom House that criticized Turkey for lack of press freedoms. "They misinformed the public by claiming Turkey did not have freedom for journalists, yet, they remained silent in the face of Israelis' attacks against journalists," he said.

Speaking at the protest, Kemal Öztürk, director of Turkey's state-run Anadolu Agency, whose employees were injured in the Israeli attacks, said their office in Gaza was bombed twice by Israeli warplanes despite notifying the Israeli government of their whereabouts, giving them the coordinates of the office so that the Israeli army wouldn't target them. "A few hours after our letter was delivered, they bombed the office again and our employees were injured. One of them was brought to Turkey for treatment as he sustained a heavy injury," he said.

Öztürk said they were journalists and did not take any sides in any conflict. "We only cover the stories of people killed in these wars and we want to cover it freely," he said. Condemning Israel, Öztürk said, "Our colleagues in AA offices in Gaza, Jerusalem and Cairo cannot bear covering the stories of slain children anymore. We cannot bear seeing the bodies of those children. Someone has to stop it."
Last Update: Aug 05, 2014 1:58 am
RELATED TOPICS