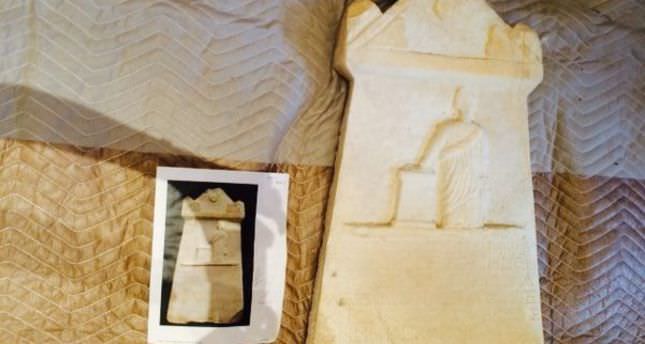 by AA Aug 06, 2014 12:00 am
The U.S. Federal Bureau of Investigation has returned 10 illegally traded historical artifacts from Lydia, an Iron Age empire in western Turkey, to the Turkish mission in Washington.

The return to the Turkish Embassy of the items - estimated to have originated in the Western Turkish province of Manisa and to date back to the first and third centuries A.D. - came during a joint presentation between officials from the FBI and Turkish mission in Washington on Tuesday.

The artefacts included grave stones and sacrifice stelas - stone or wooden slabs on which Lydians would inscribe the sacrifices of animals or possessions that deceased people had made during their lives - used in funeral or commemorative services.

The items were smuggled into the U.S. in 2006 and spotted by the Turkish Culture Ministry as they were being illegally traded, and were later seized in an operation involving Turkish security officials, the FBI and Washington D.C. police officers in May.

John Boles, the FBI Assistant Director of International Operations Division, said the operation was "another example of the strong coordination and cooperation between our two countries".

Turkey's Ambassador Serdar Kılıç thanked Professor Hasan Malay, a Turkish art historian, who had spotted the artefacts and reported their whereabouts to the authorities.

"These artifacts deserve to return to their homeland," Kilic said.

The officials declined to give details about the recovery of the artefacts, saying information was being withheld to prevent illegal traders being informed of their operations.

The Turkish Culture Ministry said the items would be put on exhibition at the Museum of Anatolian Civilizations in Ankara and then in the Manisa Museum.

The Turkish Culture Ministry has facilitated the recovery of 4,147 smuggled historical artefacts in the last 10 years and returned them to Anatolia's cultural heritage, Kılıç said.