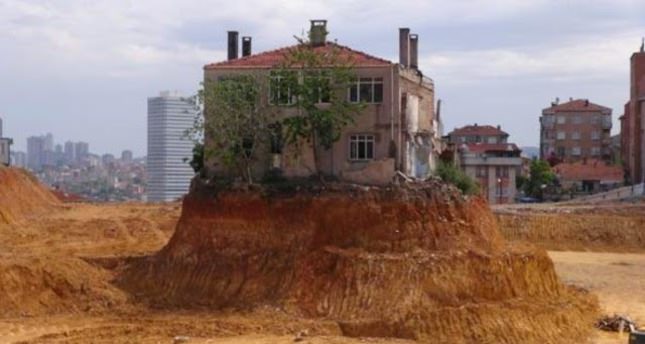 by Daily Sabah Aug 07, 2014 12:00 am
A family that refused to evacuate their house, the lone structure in the middle of an Istanbul neighborhood, destroyed for an urban redevelopment project, has finally reached agreement with the company undertaking the project.

Aladdin Demirel, owner of the two-story building in Fikirtepe, a neighborhood on the Asian side of Istanbul, had refused to sell his property to construction-company Vartaş Yapı despite all the other buildings in a plot of 31 acres being evacuated and subsequently demolished. His dispute stemmed from the lack of a demolition permit. Demirel had claimed in an earlier interview that the company started the demolition before securing a permit that required his signature.

The company announced yesterday that they managed to reach an agreement with Demirel earlier this week and that after hours of negotiations, the landlord agreed to sell his house in return for five apartments. Company officials said the building would be demolished within a couple of days. The Demirel family had already left the building after electricity and water to the building were cut off when the project officially kicked off last year.

Fikirtepe is the pilot project for urban transformation in Istanbul. Under current regulations, companies contracted for a project are permitted to launch the construction of new buildings if they can reach an agreement with two-thirds of the landowners, though the sole house in the site posed an obstacle to construction.

Urban transformation was first introduced in Turkey in 2004 as an initiative to renew lower-income areas and reinvigorate shantytown settlements.
According to officials, the government is expecting to either demolish or improve a total of 600,000 buildings as part of a nationwide urban transformation project by the end of 2014.
Last Update: Aug 08, 2014 8:07 pm
RELATED TOPICS