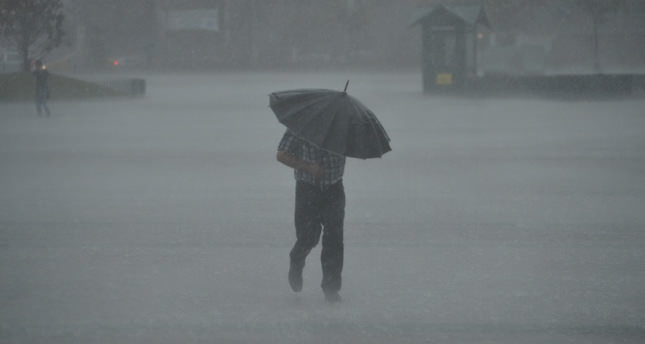 by Daily Sabah Aug 07, 2014 12:00 am
Heavy precipitation paralyzed daily life in Istanbul on Thursday. Rainfall caught people in the city off-guard who were deceived by the relatively sunny weather despite earlier warnings by forecasters about the bad weather.

Severe rain and dark clouds engulfed the city. The storms led to cancellation of flights from the Atatürk Airport on the European side for hours while flights at Sabiha Gökçen airport on the Asian side saw a delay in takeoffs due to strong winds.

A pattern of rainfall and storms will travel further east from the Marmara region on Saturday and the following days.

Meteorologists also said there is a risk of tornadoes in towns located on the seaside as well as brief storms. Partly cloudy weather is forecasted for Saturday, Sunday and Monday for Istanbul with temperatures between 31 and 32 degrees Celsius.

Stormy conditions and rainfall is predicted to leave the Marmara region on Saturday, but a risk of heavy rainfall has been forecasted for the region's eastern parts including the cities of Sakarya, Kocaeli and Yalova, as well as northern districts of Bursa located in the southern Marmara, and cities located in the western parts of the Black Sea region in northern Turkey.