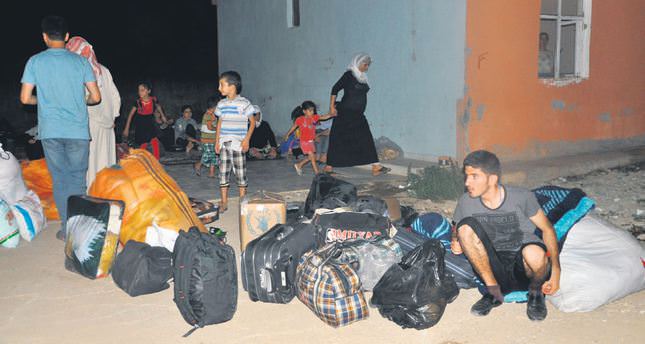 Iraq's Yazidi minority, fleeing violence in their homeland, arrived in southeastern Turkey where they were provided accommodations by Turkish authorities

On Wednesday, about 100 Yazidis fleeing brutal attacks by the Islamic State of Iraq and al-Sham (ISIS) have arrived in the southeastern Turkish province of Şırnak bordering Iraq. The local governorate of Şırnak's Silopi district accommodated the displaced Yazidis to old, unused buildings some four kilometers away from the district.

Silopi's district governor Suat Demirci said they would contact Turkey's Presidency of Disaster and Emergency Management (AFAD) for delivery of humanitarian aid to the group who left their homes in haste with few possessions, and endured an arduous journey without food and water. The local governorate will provide basic needs to the families.

Silopi co-mayor Seyfettin Aydemir also pledged municipal aid to the Yazidis. "We talked with them to learn about their needs, and will provide everything they need," he said. A local non-governmental organization already delivered food to the group. Aydemir said those carrying passports were able to cross into Turkey through the crossing, but thousands of others without a passport are waiting on the Iraqi side of the crossing awaiting for the Foreign Ministry of Iraq? to facilitate their passage into Turkey.

The Yazidi, a religious sect based on a faith mixing Zoroastrian, Islamic, Christian, Jewish and other beliefs, is regarded as heretical by ISIS, which claims to conduct "jihad" against non-Muslim groups. They are concentrated in Sinjar, a town near the Iraqi city of Mosul that was captured by ISIS militants on Sunday after clashes with the Kurdish peshmerga forces in northern Iraq. About 30,000 Yazidis reportedly fled the town after ISIS' advances. Yazidis fleeing the country told reporters ISIS militants beheaded Yazidi men and kidnapped women.

Those taking shelter in mountainous regions against ISIS face death by starvation and thirst. An Iraqi lawmaker had claimed that 500 Yazidis have been killed by the militants in Sinjar between Sunday and Tuesday.

Most Yazidis prefer fleeing into Turkey, and those with money and means relocated with their relatives in the country while those without any money or possessions remained in Şırnak. They enter Turkey via the Habur border crossing where some taxi drivers offer free rides to central Şırnak for them. Yazidis form long lines at bus stations in Şırnak where they take the buses to other Turkish cities. Locals say about 4,000 Iraqis arrived through the border crossing although it is not known how many of them are Yazidis.

Turkey is already home to 1,3 million Syrians who fled the conflict in the neighboring country. A small percentage of them live in state-run camps in the border provinces while most who cannot find vacancy in the already crowded camps take shelter in cities across the country, often living as squatters in abandoned buildings and outdoors.

The country's open-door policy for Syrians poses a challenge of social crisis for the developing country that seeks more international support for the
accommodation of Syrians.

As for Iraq, Turkey concentrated its efforts to aid Iraqi Turkmens displaced by the ISIS violence, and delivered humanitarian aid to the community that took shelter in parts of the northern Iraq controlled by the Kurdistan Regional Government (KRG).
RELATED TOPICS