Boosting aid to Iraqi Yazidis, Turkey to set up camps for the displaced in Iraq 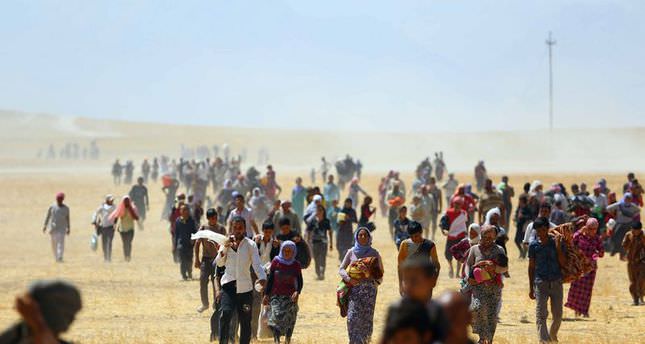 by AA Aug 14, 2014 12:00 am
Turkey will build a refugee camp in Northern Iraq for around 16,000 people from the crisis-stricken country's Yazidi ethnic minority who fled from Sinjar amid ongoing attacks by Islamic State of Iraq and al-Sham (ISIS) militants, Turkey's emergency management authority has said.

The camp is going to be built in the city of Zakho located only a few kilometers from the Iraqi-Turkish border, the Presidency of Disaster and Emergency Management (AFAD) said, adding that 30,000-40,000 Yazidis fled to Syria, whereas around 100,000 more sought refuge in Zakho, Duhok.

"There are currently around 6,500 Yazidis seeking shelter near the border," AFAD said.

The agency is also planning to send four trucks of humanitarian aid to the region in order to meet the essential requirements of the displaced minority group.

AFAD crews already set up 50 temporary tents for homeless Yazidis in Zakho while the campgrounds are being prepared for the tents.
An AFAD tent camp in Dohuk's Shariya town will house 10,000 people, and AFAD plans to expand the camp in case of a rise in the number of displaced Yazidis. A second tent camp in the Besiva district of Zakho will also house 10,000 people.

Turkey's Deputy Prime Minister Beşir Atalay said the country will also set up a tent camp exclusively for Turkmens who fled from ISIS violence in other Iraqi cities into Dohuk controlled by the Kurdistan Regional Government (KRG).

The KRG in Northern Iraq has decided to grant $15 million (TL 32.3 million) in emergency aid to the Yazidis, the government announced on its official website Wednesday.

The money earned from oil sales is going to be spent to meet the immediate requirements of the displaced Yazidis from Sinjar, the Kurdish government said, adding that the Dohuk Governorate has been commissioned to distribute aid in the region.

Amid fierce clashes with the Iraqi army and the Kurdish peshmerga forces, IS militants have tightened their grip on Northern Iraq, seizing towns with minority populations, as well as Iraq's largest dam near Mosul.

The militants captured Sinjar and Rabia in the Nineveh province last week, forcing thousands of Turkmen, Arabs, Christians and Yazidis to flee.
So far, about 2,000 Yazidi refugees from Iraq crossed the Habur border post to seek refuge in southeast Turkey. The refugees have been placed in tents and post-earthquake houses in the region.

The Turkish Red Crescent provided 20,000 blankets and sleeping pads, and sent a truckload of biscuits and drinking water to Silopi district in the southeastern Turkish province of Şırnak. The aid is being distributed to the refugees under the supervision of AFAD, the agency said Wednesday.

The humanitarian organization also sent two trucks of food and cleaning supplies to help out the displaced Turkmens in the town of Tuz Khurmatu in the Northern Iraqi province of Salahaddin.

Municipalities in Turkey also started setting up camps for Yazidis taking shelter in the country. In Viranşehir, a district of the southeastern Turkish province of Şanlıurfa, the municipality plans a tent camp with a capacity of 3,000 people. Yazidis living in Şanlıurfa allocated the land for the displaced, and 40 families who arrived from Iraq will be the first inhabitants of the tent camp. A tent camp will also be set up by local authorities in Silopi, a district of the Şırnak province that was the first destination of Yazidis fleeing ISIS violence.