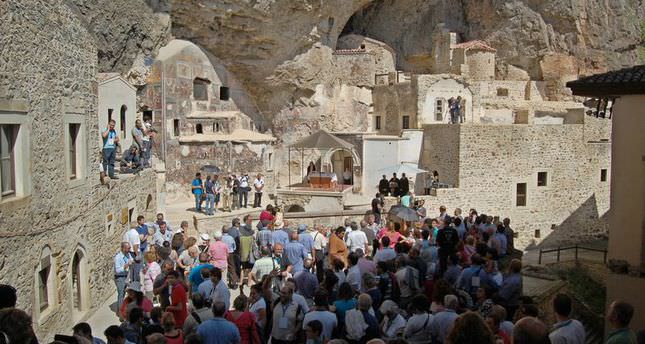 by Daily Sabah Aug 15, 2014 12:00 am
The Orthodox faithful attended the Divine Liturgy at Sümela, a historic monastery in Turkey's Black Sea province of Trabzon, yesterday. The mass was the fifth religious service held since the restoration of the monastery.

Delivering a sermon in Turkish, the patriarch congratulated President-elect Recep Tayyip Erdoğan for his victory on the Aug. 10 presidential elections. "Turkey is going through a historical process. I wish Mr. Erdoğan success, and thank the outgoing president Abdullah Gül for his service to the country," said Bartholomew I.

Referring to the conflicts in the Middle East, the patriarch called on all parties of the conflicts "not to hurt this region and the world any more." "We should recognize those different from us and respect them so that mothers, fathers and young people will not suffer," he said. The patriarch said they would pray for the oppressed, displaced and threatened people of neighboring countries, in reference to Iraq and Syria.

Sümela monastery, located on a steep cliff 1,200 meters high was reopened for religious services in 2010 with the permission of Turkish government some 88 years after it was closed to the religious use.

Dedicated to the Virgin Mary, the Orthodox monastery is surrounded by a dense forest. In the 18th century, a large part of the building was renovated, and some of its walls were decorated with frescos. A century later, the monastery was renovated again, giving it an impressive appearance with the addition of new sections.