A call for calm following unrest targeting Syrians in Turkey 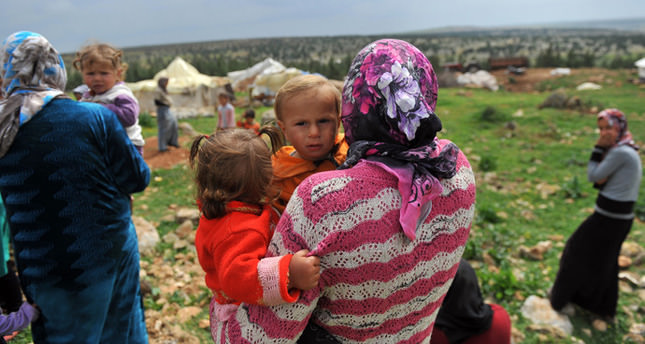 Turkish and Syrian officials are seeking to put an end to the violence towards the displaced Syrian community, urging locals to act with common sense, and to help Syrians settle

Turkish and Syrian officials have called for calm following several instances where locals in the southeast have started riots, concerned over the crime rate and the social costs of housing a large number of Syrian refugees.

The call came after riots broke out in the southeastern Turkish province of Gaziantep with the local community taking umbrage with the waves of displaced Syrians.

The murder of a Turkish landlord by his Syrian tenant, who refused to be evicted from his house, sparked violence in a neighborhood of the province. Already seething with anger over Syrians, who they accused of a rise in crime rate, some locals, accompanied by provocateurs taking advantage of the situation to start unrest, took to the streets, began attacking any Syrians passing by. They trashed cars with Syrian license plates and attempted to storm the houses where Syrians live. Riots continued for days despite the evacuation of hundreds of Syrians to other cities and reinforcement of riot police on the streets. Riots also broke out in Kilis, a neighboring province of Gaziantep on Thursday evening.

After a brawl between Syrian and Turkish children, their families confronted each other. Soon, the quarrel erupted into an all-out riot pitting locals against Syrians. A Syrian citizen was injured in the incidents. Locals proceeded to pelt a building where Syrians reside with stones. Riot police were deployed at the scene to disperse the crowd and two people involved in riots were detained by police. As the riots continued, police officers evacuated 75 people from 12 Syrian families staying in the neighborhood where the incidents occurred. Families were settled in a camp for displaced Syrians in the province while the police stepped up security measures in the neighborhood.

The growing number of Syrians taking shelter in Turkey, especially in the provinces bordering Syria, has fueled a social unrest, with the slightest rumors regarding "crimes" by Syrians triggering attacks against them. Although authorities assuage concerns about the crime rate among Syrians, their impact on the economy such as a rise in housing prices and cheap labor add to locals' woes.

Gaziantep hosts over 200,000 Syrians who increasingly face hostility with violent protests organized over social media. Authorities blame "provocateurs" for inciting riots but with no end in sight for the protests, strive to take more concrete measures. Gaziantep Mayor Fatma Sahin told Anadolu Agency that a new tent camp is being built in Islahiye, a district of Gaziantep for 25,000 Syrians "who need social support and could not adjust to life in Gaziantep." Sahin said they may plan another camp if need be. "Our Syrian guests affect the living quality of our citizens. We have to consider our citizens first. So, we needed a solution," she said. "People should be more patient. We will overcome this," Sahin added.

Gaziantep Governor Erdal Ata believes a new tent camp will hopefully end the unrest in the city. "People should be more cautious. I receive some e-mails and read local media reports calling us to send away Syrians. Where can they go? There is a war in their country. We cannot send them back," he said.

Meanwhile, the Syrian National Coalition that represents the Syrian opposition fighting the Assad regime, expressed concerns about the incidents. The Coalition officials held a press conference in Istanbul on Friday and denounced the murder. The Coalition said people of Turkey have displayed their hospitality to over 1 million Syrians who had to fled home and met all their needs.

The Syrian opposition members implied that the Syrian regime was behind "provocations" igniting riots. "They plan to spoil the image of Syrians in Turkey. We should not fall into their trap. We urge people (in Turkey) not to blame all Syrians for isolated incidents," a statement by Syrian National Coalition said.

The Coalition said the opposition and Syrian nongovernmental organizations were cooperating on several projects to help Syrians living abroad to adjust to life in the countries they lived.
Last Update: Aug 16, 2014 1:52 am
RELATED TOPICS