Over $20 million aid collected by Turkey for Gaza 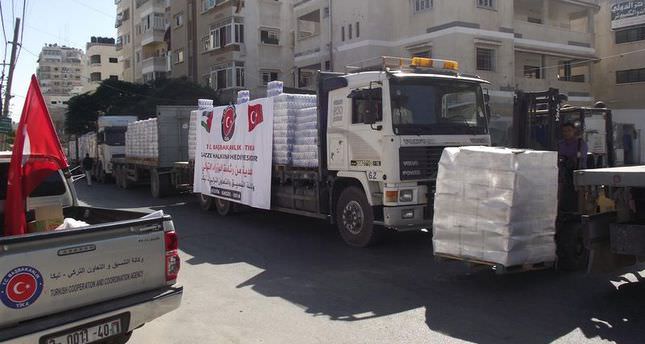 The Gaza Strip has reeled under an Israeli offensive that has killed at least 1,980 Palestinians-most of them civilians-and injured more than 10,000 since July 7.

"Turkey's international development agency (TİKA) has provided 15,000 families with food through its permanent office in Gaza under the ongoing heavy Israeli attacks," İşler said. "TİKA also has provided more than 350,000 Palestinians with daily food since the beginning of Ramadan."

Ramadan, the holiest month in the Muslim calendar, began on June 28 this year.

Palestinians and Israelis are now observing a five-day ceasefire, brokered by Egypt, which came into effect early Thursday.

Tension remains high in the West Bank, as well, as Israeli forces clash with Palestinians protesting in solidarity with those in the Gaza Strip.

"The Palestinian Energy Authority was provided with desperately-needed fuel," İşler said. "The Turkish Red Crescent has delivered aid basically consisting of medicine. Gaza and other municipalities' immediate needs, like generators, were also delivered."

He said some injured Gazans are being treated in Turkish hospitals.

On Wednesday, a Turkish Armed Forces plane airlifted 18 injured Gazans, including a pregnant woman and five children, to Ankara, the Turkish capital, for medical treatment.