Memories of 1999 earthquake linger as Turkey marches on 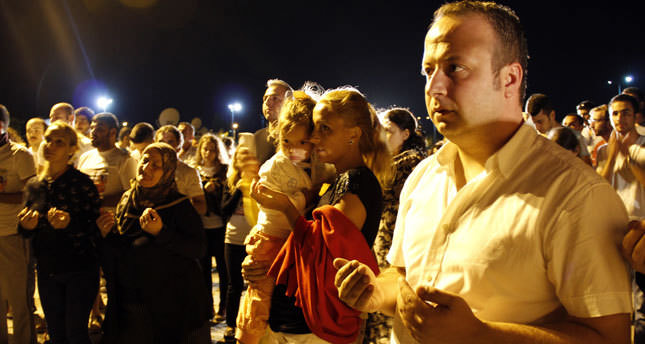 Fifteen years ago, an earthquake with a magnitude of 7.4 on the Richter scale rocked Turkey at 03:02 a.m. on August 17. The earthquake killed over 17,000 people and left thousands more homeless. Early yesterday, people gathered in Kavaklı, a beach in the Gölcük district of northwestern province of Kocaeli that was the epicenter of the quake, some 100 kilometers away from country's most populated city, Istanbul, and held a vigil for victims. Thousands of people prayed in memory of the deceased. They observed one minute of silence at a monument dedicated to earthquake victims and threw carnations into the sea at the exact moment the quake shook Kocaeli. A commemoration ceremony was also held at a naval base in Gölcük, where 420 soldiers were killed, amid tears of their relatives. Yalova, a province near the epicenter which was left in ruins in the earthquake was also scene of commemoration ceremonies.

As the sun rose, families of earthquake victims flocked to cemeteries in Gölcük to recite prayers for their loved ones. Hasan Kenan lost his pregnant daughter Fatma in the earthquake. "She had labor pains some 10 minutes before the earthquake. We lost both her and her baby daughter. There were 32 residents in our apartment building and only 18 survived," he told Anadolu Agency. Kenan says their pain is still "fresh" despite the 15 years that have passed and he can only wish there won't be any more earthquakes.

In Sakarya, a neighboring province hit by the 1999 earthquake, a commemoration ceremony was held in a central square. Thousands of people attended the ceremony, praying and reading verses from the Qur'an.

Fikri Işık, Minister of Science, Industry and Technology who attended the ceremonies in Gölcük said Turkey managed to heal the physical wounds of the earthquake. "You see this beach is back to its old glory. We did everything and rebuilt Kocaeli. The only thing we cannot do is bring back people we lost," he told the crowd.

"We will not forget the reality of earthquakes. Earthquakes do not kill people. It is people's ignorance and greed," he said, referring to deaths of many victims in poorly-built apartment buildings. "We learnt our lesson in Kocaeli earthquake and managed to recover quickly after the Van earthquake," Işık said. In 2011, an earthquake of 7.2 magnitude on Richter scale struck the eastern province of Van, killing over 600 people.

About one month after the earthquake, the construction of new buildings for people who lost their homes started and was completed within eight months while some 175,000 people were accommodated in prefabricated houses provided by the government.

The 1999 earthquake has been a turning point for many. For survivors, it meant a lengthy trauma. For the public, it was a symbol of anger against the government that has been slow to respond to one of the worst disasters in the past century. The officials of the thengovernment arrived some three days after the earthquake and the public services to help the survivors remained ineffective. Roads leading to the areas affected by the earthquake had been blocked due to the damage for days. The Turkish Red Crescent, country's main state-run aid organization responded poorly, delivering damaged tents decaying in the warehouses to survivors while volunteer search and rescue organizations shone in their rescue efforts.

The earthquake also exposed the absence of measures against such a large-scale disaster. Many buildings were not secure against earthquakes and a lack of supervision and legal regulations for a better inspection of buildings in compliance with construction standards were nonexistent.
Experts attribute the large death toll to the fragile state of buildings in a country sitting on multiple active fault lines, particularly those traversing the northwestern and western parts where the population is concentrated.

Years after the disaster, Turkey has seen an overhaul of measures against the earthquakes such as a compulsory earthquake insurance and campaigns to raise awareness about the disaster to inform the public. More importantly, the new government undertook an ambitious project: urban transformation. The old, crumbling buildings across the country are being demolished to make way for new earthquakeproof buildings. Though it is difficult to entirely change the course of urbanization and housing that led to a haphazard development especially in big cities decades ago, the country is gradually renewing the infrastructure through this project. According to the Ministry of Environment and Urban Planning, there are 42,000 at-risk buildings in the country and those will be "transformed" into contemporary and safe buildings.