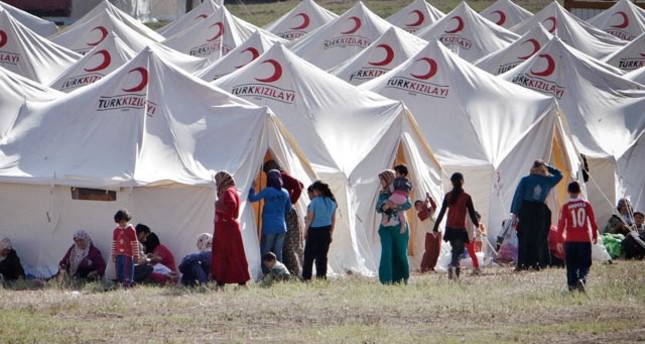 by Daily Sabah Aug 18, 2014 12:00 am
Syrians in a refugee tent camp in the southeastern Turkish province of Mardin engaged in a fight yesterday for an unknown reason. Wielding sticks and stones, a group staying at the camp in the Nusaybin district clashed with another group of Syrians who had arrived from the southeastern province of Gaziantep earlier this week. Turkish gendarmerie troops fired into the air and fired tear gas to disperse the crowd. Seven troops and two private security guards working at the camp were injured when stones the groups threw at each other hit them. Four Syrians were also injured in the clash. Over 5,000 Syrians are staying at the camp. A group of Syrians were brought in from Gaziantep earlier this week after angry locals rioted over their presence and the murder of a Turkish landlord by his Syrian tenant he had argued with.