Turkish charity to set up camp for the displaced in Syria 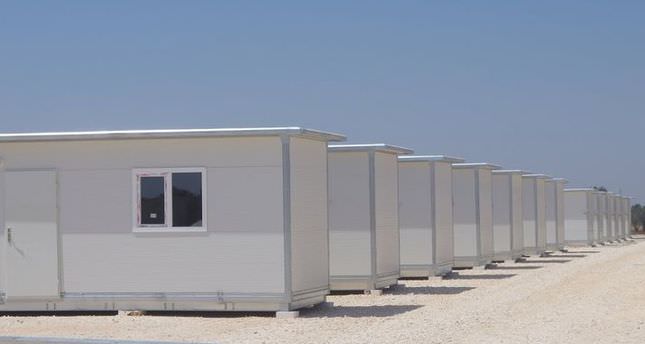 by AA Aug 18, 2014 12:00 am
A Turkish aid organization announced yesterday that it will set up the "biggest" camp for internally displaced Syrians in the country's Aleppo province.

Turkey's Humanitarian Aid Foundation (IHH) plans to build a camp for the internally displaced that will house 10,000 people. The organization dubs the project as the "biggest of its kind in Syria."

The camp will be located in the Siccu village of Aleppo's Azaz district, two kilometers away from the Syrian-Turkish border. It will be composed of containers converted into housing units, and will be built on an area of about 95 acres. Apart from housing units, the camp will have a clinic, mosque and recreational facilities.

The Turkish charity has already built a camp with 700 container houses in Shammarin, Aleppo. Erhan Yemelek, an IHH representative for Kilis, the Turkish province located across from Aleppo, said the new camp will be biggest in Syria with 1,000 containers. He said the camp will be modeled after those built in Turkey by state-run Presidency of Disaster and Emergency Management (AFAD) but "with lower standards." He said they already set up 300 container houses, and the rest will be installed within one month.

Yemelek said tent camps proved problematic as they were not durable enough to sustain heavy weather conditions, and displaced Syrians living in tent camps will be relocated to the container camp. He said the number of displaced people taking shelter in tent camps in the Babussalama district of Aleppo has surpassed 40,000, and some of them would be moved to the new container camp as well.

Although clashes between rebels from the Free Syrian Army and the regime forces, as well as between rebels and radical groups are still underway, Syria's northern regions are mostly controlled by rebels, thus, providing a safer haven for those fleeing conflict in other parts of the country. The number of internally displaced people is estimated to be over 6.4 million. Those managing to reach the country's borders from Syria's inner regions have fled to neighboring countries, including Turkey, which already hosts over 1 million people from the war-torn country.
Turkey is at the forefront of efforts to help Syrians both in Turkey and Syria. However, as the conflict prolongs, aid efforts are being affected. The deteriorating security situation poses a continuous risk to humanitarian aid delivery. Trucks carrying humanitarian aid and commercial goods to Syria are stranded in a long line reaching 10 kilometers at Turkey's Öncüpınar border crossing with Syria. Humanitarian aid and goods are normally transferred to Syrian trucks on the other side of border but due to ongoing clashes, Syrian trucks cannot make it to the crossing, forcing drivers to wait in scorching heat at the crossing.