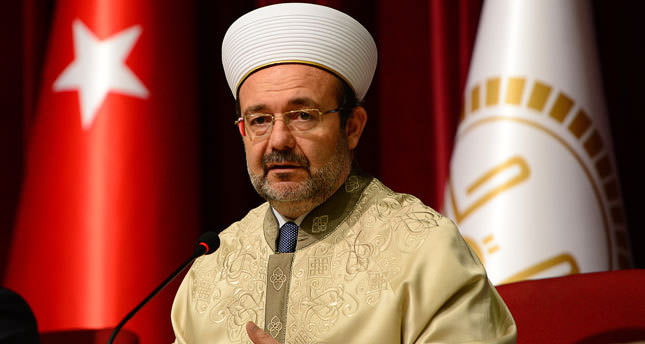 by Daily Sabah Aug 20, 2014 12:00 am
Mehmet Görmez, the head of Turkey's Directorate of Religious Affairs in a recent statement has denounced the self-proclaimed Islamic State of Iraq and al-Sham (ISIS) for portraying a wrongful image of Islam and Muslims.

In response to a question about ISIS's violence against Yazidi people in Iraq, Görmez urged everyone to avoid referring to ISIS with its full name and stick to its abbreviation instead because it contains the word "Islam", which is considered to be a holy name for millions of Muslims.

Expressing that ISIS's violent actions have no place in Islam, its history, civilization or the Holy Qur'an, Görmez stated that they contradict the notion of Islam, which is based on peace, toleration, understanding and love. "Their actions may perhaps be explained by medical and psychiatric terms" said Görmez, noting that ISIS is a product of a social trauma caused under the shadow of lunacy and violence by people whose conscious have been bruised and see no trouble in the ruthless killing of other humans. "Such traumas have no place in Islam, in any of its sects or dispositions" Görmez stated.

On the other hand, Görmez expressed that Muslims acknowledge the existence of non-Muslim communities in the region and accept their right to coexist. "Islam stipulates that all citizens have equal rights and can live their lives in accordance with their belief systems" said Görmez, who continued by stating that all non-Muslims have the same rights and responsibilities as Muslims according to the religion and any thought process which opposes this peaceful context are foreign to Islam.

ISIS was once part of al-Qaeda but was disowned by the organization due to its aggressive stance against other opposition groups in Syria, including al-Qaeda's official Syrian branch, Jabhat al-Nusra. Their attacks have killed and displaced thousands of people in Iraq.