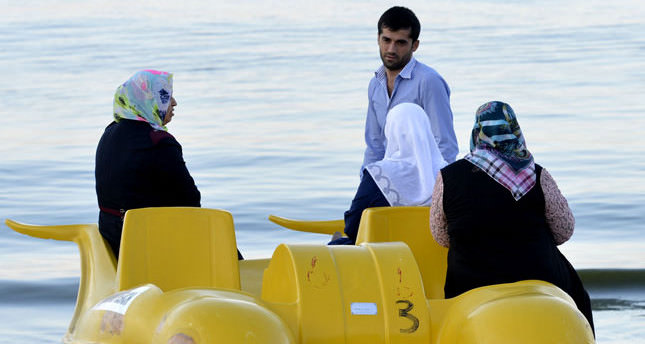 by Daily Sabah Aug 20, 2014 12:00 am
Five men went missing after they ventured out on a paddle boat off the northwestern coast of Istanbul on Sunday. Search and rescue efforts are underway to find the five friends aged between 25 and 30, with two of them brothers. The Turkish coast guard, local search and rescue organizations and locals have combed the sea and the coast to locate the missing people while their families desperately wait for good news.

Bilal Altıntop, cousin of one of the men who went missing on Sunday afternoon, told reporters the person who rented the paddleboat to the men notified the security forces too late after the incident, only to report that his paddleboat was "stolen."

Hasan Akgün, mayor of Istanbul's Büyükçekmece district where the men went missing, said they imposed an immediate ban on paddleboats. Akgün said there wasn't any legal regulations about the operation and inspection of paddle boats. He said loopholes in the laws enabled paddleboat operators to run the business without any inspection. "They don't care about who rents the boats, whether those renting know how to swim or sail. There should be regulations. We will ban paddleboats until regulations are in order. We cannot endanger the lives of people," Akgün said.
Last Update: Aug 20, 2014 1:07 am
RELATED TOPICS