Muslim scholars discuss their role in guiding the community 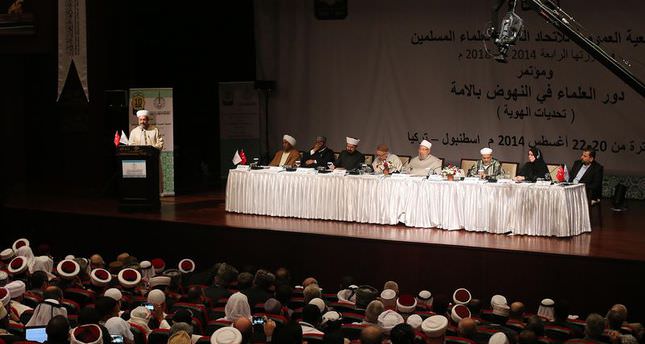 by Daily Sabah Aug 21, 2014 12:00 am
The International Union of Muslim Scholars brought together prominent clerics from the Muslim world for a three-day convention in Istanbul on Wednesday called The Role of Scholars in the Ummah's Awakening.

The convention was attended by the union's chairman and renowned Egyptian Muslim scholar Yusuf al-Qaradawi, Secretary-General Muhyiddin el-Karadaghi, founder of Tunisia's En-Nahda Movement Rashid al-Ghannushi, the prominent Yemeni cleric Abdulwahhab ad-Daylami and Mufti of Chechnya Salah Mejiyev as well as other scholars from around the world.

The scholars discussed the conflicts affecting Muslims, the role of Muslim scholars in guiding the ummah (the World-wide Muslim community) and dealing with problems of identity as well as Islamic education.

In his opening address to the convention, Mehmet Görmez, head of Turkey's Presidency of Religious Affairs, said scholars played a major role for the current state of the ummah. "In the past scholars had to bow to rulers and today they have become a mouthpiece for leaders, military juntas and sultans. The bitter reality is that Muslim scholars do not fulfil their responsibilities and the ummah faces great problems and a great divide. Current conflicts between Muslims are unprecedented and foreign powers are not solely responsible for them. They wouldn't be able to pit Muslims against each other if it were not for the weakness of Muslims themselves," Görmez said.

Görmez said that some scholars acting as spokesmen for rulers "with bloody hands" have become more damaging to the ummah than its oppressors. "They exchanged their religion for worldly possessions and became the voice of dictators while they used to serve Muslims at the mosques in the past," he said. Further criticizing the scholars, Görmez said some scholars did not raise their voice against the slaughter of "the ummah's children in Gaza, Syria and Iraq."

"We haven't seen such violence in the history. They have no morals and principles – they displace non-Muslims and blow up tombs of the sahaba (companions of Prophet Muhammad). Scholars have to confront this. We have a responsibility," he said, referring to self-proclaimed Islamic factions such as the Islamic State of Iraq and al-Sham (ISIS) that is carrying out a brutal campaign against Muslims and non-Muslims in Iraq and Syria.

Görmez said Muslims needed to use all resources they have to spread tolerance and love. "We have to put aside what happened in history and put an end to strife between Muslims," he said, adding that extremists aimed to eradicate all Muslims.

Speaking at the meeting, Yusuf al-Qaradawi said the union progressed a lot since its inception in 2004. "No country would allow us to hold a meeting and we had to hold our first meeting in Ireland. Now, we are able to meet in many other countries and a great number of scholars from different countries have applied for membership," he said. Al-Qaradawi said reclamation of the community would be through scholars. "If scholars do not pursue reclamation, the community will be corrupt. Our union has a program to reform the ummah and show them the righteous path," he said.

Rashid al-Ghannushi said at the meeting that the ummah needed unity, not division. "Muslims cannot declare other Muslims as infidels.

Muslims cannot take up arms against other Muslims. It is our duty to protect the right of the oppressed, be they Muslims or not," he said.

Al-Ghannushi said that Muslims needed to put aside sectarian and racial differences. "A mindset of people declaring each other infidels, killing each other and succumbing to dictatorships prevails in our ummah. A peaceful solution is needed for the unity of the ummah but unfortunately, every side in any conflict claims they are right for their own part and violate others right to live," he said. Al-Ghannushi said Muslim leaders have to maintain justice, adding, "Unfortunately, an unjust system and oppressors are prevalent today."