Number of Palestinians flown to Turkey for treatment now 48 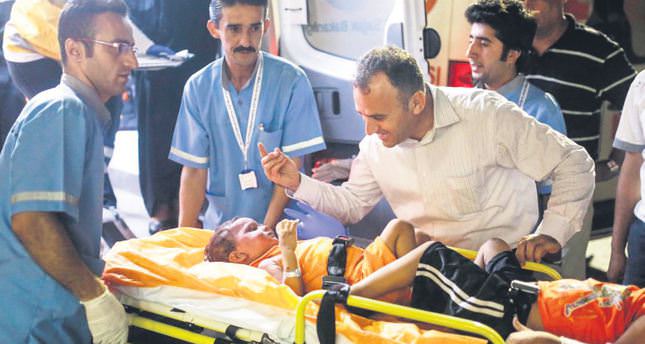 Turkey received 23 more Palestinians on Wednesday evening injured in Israel's attacks as the country continues airlifts from Israel, bringing the total number of injured brought to Turkey for treatment to 48

On Wednesday evening, 23 Palestinians from the Gaza Strip who were injured in Israel's brutal offensive were flown to Istanbul for treatment.
Wounded Palestinians with 23 Palestinians accompanying them boarded a Turkish army cargo plane that took off from Tel Aviv landed at Istanbul's Sabiha Gökçen airport. Deputy Prime Minister Emrullah İşler welcomed the injured Palestinians at the airport. The wounded were taken to two hospitals on Istanbul's Asian side.

Recep Demirhan, chief physician of one of the hospitals, told Anadolu Agency that they received 12 Palestinians including eight children. He said their injuries were "neither life-threatening nor slight." "Most of them have fractures in ribs or legs. Some of them have already undergone surgery and suffered from infections. They will undergo treatment here for a full recovery," he said.

Palestinians crossing into Israel from the Erez border crossing were first transferred to Tel Aviv's Ben Gurion airport where the Turkish airplane awaited them. Turkey's Disaster and Emergency Management Authority (AFAD), the Turkish Army, Ministry of Health, Turkish Cooperation and Coordination Agency (TİKA), Red Crescent and the Ministry of Foreign Affairs coordinated the transfer of Palestinians to Turkey.

With the new arrivals, the number of Palestinians treated in Turkey for wounds they sustained during Israel's attacks in Gaza rose to 48. Turkey plans to bring at least 150 other wounded Palestinians in for treatment. Speaking to reporters at the airport, Emrullah İşler noted Turkey has conducted three airlifts before and more airlifts will be carried out in the near future.

"Israel's attacks resumed on Tuesday and there are hundreds of people injured. This war should come to an end. You see those who have suffered most are children. I am in utter grief after seeing two children aboard the plane. They were lying unconscious. It is heartbreaking. This pain should end," he said. İşler reminded that Turkey sent humanitarian aid to Gaza within the first week of attacks in July. "We have delivered hot meals to Gazans daily and sent humanitarian aid. We will deliver more. The delivery could be faster but Gaza is still under a blockade," he said. İşler also criticized the international community for turning a blind eye to the plight of Gazans.

Turkey has already delivered 10,000 boxes of food, $1.5 million (TL 3.27 million) worth of medicine and medical equipment as well as fuel, beds, blankets and generators to Gaza. The Israeli offensive since Jul. 7 has left 2,050 Palestinians dead and 10,224 injured according to Palestinian sources. The Israeli army had initially launched airstrikes on Gaza under the pretext of stopping rocket attacks by Palestinian factions and later issued a land offensive on Jul. 17. Israelis and Palestinians have failed to reach a permanent truce since then.
Last Update: Aug 22, 2014 11:29 am
RELATED TOPICS